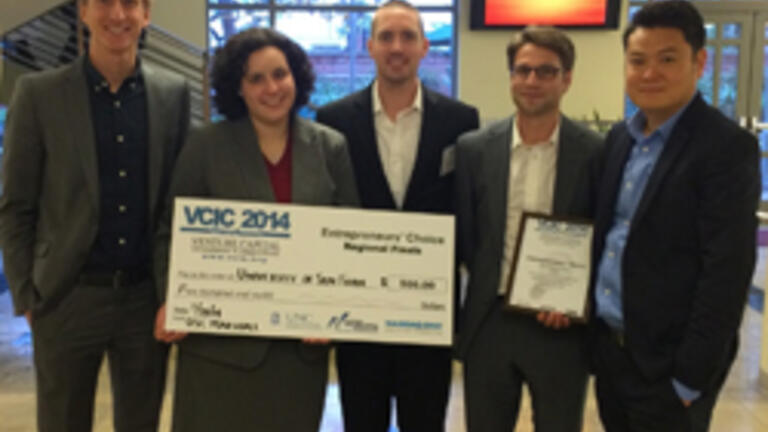 Founded in 1998 during the height of the dotcom bubble, VCIC® was designed to provide MBAs with experiential learning around venture funding. The competition has since evolved into a marketplace for entrepreneurs seeking investors and a training ground for future venture capitalists.

On competition day, the USF team sat down for negotiations with the company that proved the most realistic business model and was backed by a strong management team. Each student team plays the role of a venture capital firm that must go through the entire VC investment process in an extremely condensed time period.

Under the direction of Professor O’Regan and USF alumnus Goodarz Goodarzi, the USF team was formed based on performance in mock due-diligence sessions. Once selected, the students prepared for the competition with bi-monthly strategy sessions on team dynamics, finance, strategy, negotiations, and research tools. They consulted with industry professionals, venture capitalists, and professors, including David Epstein, CEO of a Swedish solar company, VC, and former USF finance professor, and Tom Klein, startup and IP lawyer in Palo Alto. The team further prepared with mock due-diligence and negotiation sessions in front of a practice judging panel, which consisted of two VC/entrepreneurs and an intellectual property lawyer.

USF’s involvement in VCIC® first began under the direction of Professor Mark Cannice in 2005, and he has continued to foster MBA student participation.