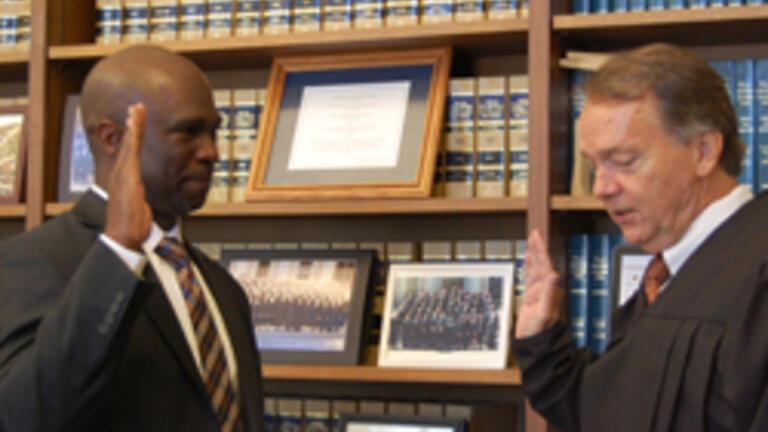 California Governor Jerry Brown has appointed Charles E. Wilson II, JD/MBA ’02, as a Superior Court Judge in Santa Clara County. “As someone who has practiced law for the past 12 years, I realize how important the role of a judge is,” said Wilson. “I’m very honored that the governor feels that I am a good choice to fill that role.”

Wilson received both his MBA and Juris Doctorate degrees from the University of San Francisco in 2002, and went on to practice law as a litigation associate at various firms. The diversity of Wilson’s USF education and his background have greatly contributed to his approach to practicing law and to the kind of judge he aims to be. “In both the School of Law and the School of Management at USF, the professors made sure we were not only good students but also good citizens, and global citizens. Coming from a different [socioeconomic] background than most [law practitioners], growing up in East Palo Alto, I realize how important it is for the system to both appear fair and also to be fair in actuality. I want to make sure that everyone has a fair chance to be heard in my courtroom. Throughout my career I want to continue to set high standards.”

Wilson has served as Deputy District Attorney at the Alameda County District Attorney’s Office since 2007. Having grown up in East Palo Alto and being only 39 years old, Wilson says that his appointment has proved to him that there is no discrimination by age or socio-economic factors in the appointments of candidates to judgeships. “I assume that people have to have a right background and history in order to end up on the bench,” he said, “experience being an obvious factor. But my appointment proves to me that people can come from diverse backgrounds. There’s no discrimination by age, or by socioeconomic background, that’s what this means.”

Pursuing his degrees in San Francisco provided Wilson with a unique perspective on business, law, and society. He said, “SF is an economic center of the state, of the country, and it’s a major city for commerce. When I was in the business program back in 2000, that was the time of the first dot com wave, we were mid-bubble, and I remember all the opportunities we had as students, visiting startups and tech companies. We met with founders and toured their business spaces, saw what they were doing to foster their companies. I know that USF still does this for its students, and I know that is stuff that I wouldn’t have seen and wouldn’t have had access to if I’d gone to school in another area. SF provides opportunities that students in other areas just don’t have.”

Amongst other things, San Francisco and USF helped turn Wilson into a global citizen. “Many of my fellow students were from the far reaches of the globe, and we learned that our common goal not just to make a living, but to be good stewards for our communities. I still remember many conversations I had with people who grew up on other ends of the country, or the world, and it just made me realize our commonalities. USF was able to provide that to me, and I’ve held on to it in my career, and I think that’s priceless. I think I’ve been able to bring this perspective into my courtroom. I’m not sure this would have been the case if I hadn’t gone to school with such a diverse group of people.”

Wilson says one of the most invaluable skills he perfected during his time in the MBA program was working collaboratively with other people, which allowed him to see the variety of skills different people can bring to the table, and which has served him well throughout his entire career. “The preparation that I had coming from USF allowed me to hit the ground running,” he said. Most importantly, he feels that the skills he picked up during his business and law degrees enabled him to do good. “I [was able] to practice law in a way I think my peers and the industry found valuable and helpful. It has allowed me to do good, throughout my law career, and now to do [even] more good. I guess ultimately USF really laid the groundwork and the foundation for many of the things that have recently come to pass for me, and a lot of what has happened throughout my career.”