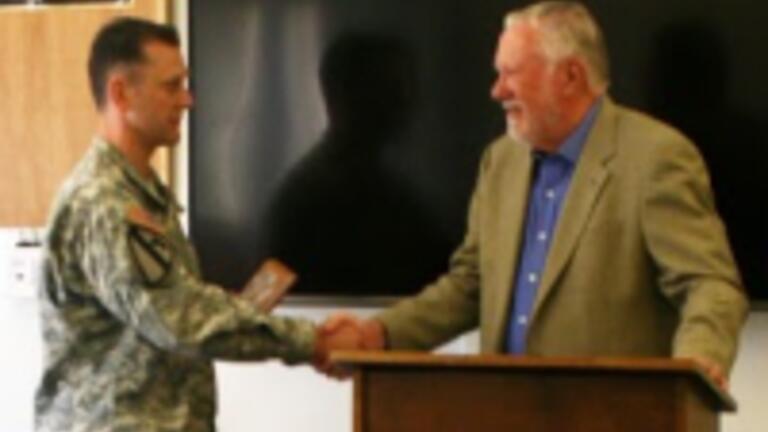 Dr. Charles Geschke, Adobe Systems co-founder, engaged with ROTC senior Cadets on the topics of leadership, culture and values. On Friday, September 27, Dr. Geschke joined Lieutenant Colonel Kevin Inglin’s class, Developing Adaptive Leaders, to have an in-depth discussion with the Military Science IV Cadets. The Cadets are on schedule to be commissioned as Second Lieutenants and will immediately report for duty as leaders of the United States Army and graduates of the School of Management.

Dr. Geschke is an internationally recognized leader and innovator whose values align with both his own Jesuit education and the military education the Cadets are receiving.  He began his talk by telling the students an anecdote about his early years as a manager, during which he learned a lesson in the benefits of treating employees well; a lesson that remained pertinent throughout his lecture. “Anyone whom you deal with, whether they are vendors, customers, shareholders or other members of a community, should be treated the way you want to be treated,” said Dr. Geschke. “Do it consistently and people will respect you.” He emphasized that part of a leadership position is learning how to hone in on interpersonal skills. “Give people an incentive to be motivated, change is something that motivates people,” he said. “Recognize people’s accomplishments, and salute them for accomplishing something significant. Give them opportunities to grow and advance in responsibility. Don’t just make people feel like they’re responsible, actually give them more responsibility. Whether you’re relaying good news or bad news, it can pay off nicely depending on the successes you have when dealing with people.” Although soft spoken, his words and his message reverberated in volume.

Implementing his own philosophy, Dr. Geschke left the students with an added responsibility. “The fact that you are here at USF means that you have been given many gifts that not many people are given,” he said. “You have been given an opportunity. Loved ones, friends and the world expect great things from you. Take your time as you climb the ladder of success. Look back every now and then and reach down towards the person who is a few rungs below you and give them a hand, give them a chance, a start, protection, but most of all give them their dignity. Because when you leave here, that is what it means to be a graduate of USF. Build a career in which your passion exists.”The senior Cadets are currently in leadership roles, guiding less experienced military students. Many of them took Dr. Geschke’s words to heart. Julieta Prado, a senior Cadet, said she found his advice on leadership very valuable. “The Army is team based,” she said, “so when he said we must learn how to treat people they way we would want to be treated, that was huge. I loved what he said about change motivating people and to always give people a purpose but guide them through that change. Being in a leadership role I realized I want to guide others how I would want to be guided through.”

Dr. Geschke spoke about his own personal struggles while in academia. During his time as a mathematics professor a grateful former student taught him to code and Dr. Geschke developed his passion for computer programming. He revealed that during this period of his career, the biggest barrier turned out to be himself, and his difficulty with facing the reality in which he had to give up being a professor and an engineer. With the help of his wife, he came to understand that his true desire was to create something the world could use, thereby combining an engineer’s dream with his passion for computer programming. Through struggle, Dr. Geschke emerged successful. As co-inventor of the PDF, he developed a product that has forever changed the way people communicate electronically.

Dr. Geschke’s words reminded many of the students of their passions and of what originally inspired them to pursue a higher education. Cadet Maria Barrameda said, “I don’t want to look back and regret not doing something. I want to live my life to its fullest potential. He made me realize that I do want to pursue a graduate education and apply for medical school after graduating from USF.”“Aggressively chase after your passion and never settle for less,” Dr. Geschke said. “Take chances.” Part of taking chances, according to Dr. Geschke, is getting out of one’s comfort zone. He urged the Cadets, many of whom will serve overseas and soon be out of their comfort zones, to embrace different cultures, and to travel extensively. “Get out of the U.S.,” he said, “so you can open your eyes to how other people live. It is intensified if you take the time to travel the world. You can’t possibly get that from the culture you’re currently in.”