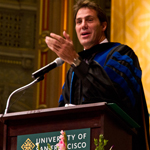 DeWalt, a well-known authority in cyber security, has more than 25 years experience building prominent technology companies focused on information security and threat protection. He was named CEO of FireEye in November after serving as the company's board chairman since June 2012. Prior to joining FireEye, DeWalt served as president, chief executive officer, and director of McAfee, Inc. He has held executive positions in industry-leading companies, including Intel, Oracle, and Quest Software. He is also a frequent speaker at the World Economic Forum in Davos, Switzerland. In May 2011, DeWalt was appointed by President Barack Obama to serve on the National Security Technology Advisory Council.