Professor Tony Ribera spoke about the importance of ethical leadership and service during his keynote speech at the annual Pearls in Policing conference in mid June. 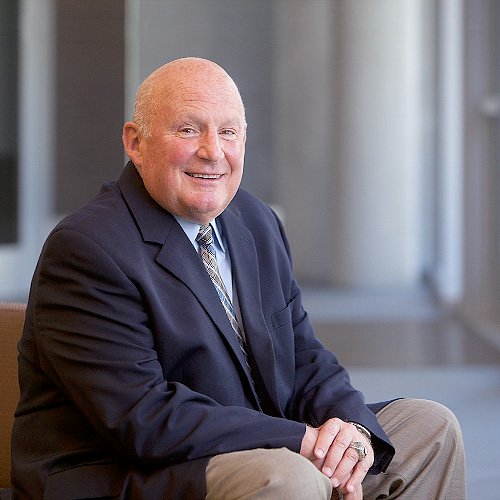 Ribera, former Chief of Police of San Francisco and current Director of the International Institute of Criminal Justice Leadership at the USF School of Management, discussed the traits that are characteristic of great leaders during his keynote speech. “Compassion and collaboration are key,” said Professor Ribera. “A leader who doesn’t collaborate with the members of his or her organization and who doesn’t treat people with compassion and respect will end up roaming around the hallways of power totally lost.”

Professor Ribera says he has been inspired by Chris Lowney’s book Heroic Leadership, on the founding of the Jesuit Order by Ignatius of Loyola, who had the goal of educating the world. “Ignatius felt that his philosophy of dealing with human beings would apply everywhere in the world,” said Ribera to his international audience. “The idea is to treat people with dignity and compassion, and to serve not because you have to, but because you want to. I strongly believe in these principles.” Ribera explained that one of the reasons he chose this topic for his keynote was that he went to a conference a month earlier where speakers talked about law enforcement strategies such as evidence-based policing and strategic planning in enforcement. He had heard most of the topics being discussed countless times before, and suspected that many other law enforcement officials had, too. “I decided that at Pearls in Policing I would give the attendees something they most likely hadn’t heard before,” he said. “I wanted to inspire people.”

Pearls in Policing is an international organization that facilitates the strategic, professional and personal development of law enforcement leaders. Its annual conference, hosted by a different country every year, is a chance for law enforcement executives from around the world meet to discuss the challenges they face in a small and informal setting, which provides them with the opportunity to expand their vision of their profession. This year’s conference, hosted by the Sir Francis Drake Hotel in San Francisco, employed the theme of “A New Police, A New Generation.” Ribera saw it as an opportunity to skip the usual discussions of law enforcement strategy and tactics, and instead talk about what inspires people to pursue a path of ethical leadership. “I believe it’s very important to get our young officers to embrace the idea of service. I wanted to bring these ideas to their attention. In law enforcement there is a great sense of personal fulfilment in serving others. We should serve not because we have to, but because we want to.”

Professor Ribera believes the four Jesuit pillars of leadership are universally applicable and tries to use them in his teaching and his life. The first pillar is self-awareness. “We must evaluate our strengths and weaknesses daily, and strive to improve,” said Professor Ribera. “We can ask ourselves critical questions, such as ‘how can I be a better leader? Father? Spouse? Friend? How can I serve better?’ And sometimes we have to ask ourselves whether we’ve made a mistake, and if that turns out to be the case, then we must take full responsibility for it. This applies doubly to law enforcement, which is a field that is highly at risk of avoiding responsibilities for a system’s mistakes. But admitting our failures and addressing them is an important part of being a successful leader.”

The second pillar of leadership is ingenuity, or the ability to embrace change, explore new ideas. “In law enforcement, it is our ingenuity that prevents and solves crimes,” said Professor Ribera, “and so it makes life better for the people we serve.”

The third pillar is love. Professor Ribera said, “Love, to me, is the insight to see the dignity of every man, woman and child we encounter, and to treat them all with compassion. To be a successful leader you should embrace that thought.” Professor Ribera told an anecdote to illustrate the importance of compassion in law enforcement. When he was a lieutenant, in 1986, he commanded the afternoon watch in San Francisco’s Mission district. Two of his officers, Eric Quema and Louis Espinda, were extremely productive, and one day the director of the Office of Citizens’ Complaints wanted to present them with an award. That year, Quema and Espinda had made more felony arrests than any team in the department, and they had had 17 people sentenced to San Quentin State Prison. However, the award was not for their productivity, but for the fact that they had not received a single complaint from any of the arrestees. “They aggressively enforced the law, but they treated every single person with dignity and respect,” said Professor Ribera. “You may define love as you choose, but we must never compromise the human dignity of the people we serve.”

The fourth pillar is heroism, which Ribera says requires a sense of optimism in the face of adversity, and a belief in one’s self that we can overcome any obstacles. “Fear can be debilitating, while optimism can be inspiring,” Professor Ribera said. He feels this is especially applicable in terms of criticism and transparency in law enforcement. “Transparency is a word that is often spoken, but seldom embraced,” he said. “Certainly there are aspects of law enforcement that require confidentiality, but too often we embrace secrecy, primarily because we fear public scrutiny. I contend that public scrutiny is a form of feedback which helps us do our job better.”

Professor Ribera wanted the international law enforcers to leave the conference with the knowledge that collaboration is a crucial component of transparency. “When I served as police chief, my staff did most of the planning and had significant input on our decision making processes,” Ribera said. “I valued their input. And our officers in the field were the ones who prevented crime, made the arrests, and served our citizens 24 hours a day. That’s why, when I was publicly asked how I managed to reduce crime by almost 30%, I said ‘I didn’t! My officers did!’” The successful leader, Ribera says, taps into a variety of internal and external personnel resources. That way they can gather the best information and achieve the support and feedback necessary for success.