Alumni and Students go Behind the Scenes at Kiva

The University of San Francisco’s (USF) School of Management spent an enlightening evening at Kiva’s headquarters learning about crowd-funding small business loans to people around the world. 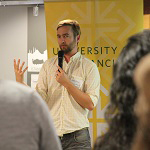 At the event, School of Management Dean, Elizabeth Davis, spoke about her personal, longtime connection with Kiva. “When I first entered Academia after leaving the business world, I was teaching entrepreneurship and strategy and Kiva was just emerging,” she said. “I asked my students if we should support a business and they each gave $5 to support a proprietor who was building a food business in Kenya. Kiva was the very first project we worked on.”

Founded in 2005, a $200 from Kiva loan usually comes from eight different people, each lending $25. When the borrower repays the loan to the lender, the lender can then decide to lend the money to another small business entrepreneur. Through this model, Kiva has made loans in 85 countries and supported 1.4 million small business owners with $700 million in capital. These loans have been funded by an almost stable number of lenders of around 1.3 million The traditional Kiva model partners with local micro-financing institutions who have enabled Kiva to scale and maintain its 99% repayment rate over the last ten years.

“When we can see each other’s stories it creates understanding and empathy,” Shah said. “Where there is empathy, it in turn creates generosity, which is sustained when there is accountability. That’s the beautiful thing about Kiva, it’s both knowing where your money is going and who it is helping, as well as the accountability of knowing that the model is working because your loan is being repaid, which makes people feel like their altruism was effective and justified.”

This is an exciting opportunity to acknowledge that both Kiva and USF share common fundamental values,” Davis said. “Both organizations are committed to educating the next generation of conscious leaders who are engaged in very purposeful activities. Moreover, we are both part of a culture of innovation. Kiva stands for innovation, USF is engaged in innovation. We’re honored to share in our common mission of social justice around the world.”

Kiva’s President and Co-founder Premal Shah echoed the sentiment of the Dean.“Everyone is more powerful than anyone. For us to make the biggest possible difference, we have to work in collaboration with like-minded others,” Shah said. “We at Kiva are based in San Francisco but are helping entrepreneurs in over 85 countries, couldn’t be more thrilled to have USF as our partner. USF attracts students who not only want to make their own lives better but also want to make others lives better. So much of what the School of Management stands for is putting purpose at the center of business. There is a healthy undergraduate and graduate population studying social entrepreneurship. Where the university is a think-tank, Kiva is a do-tank. Imagine the possibilities.”

Both USF and Kiva are looking to expand their communities of change-makers and to help each other make the world a better place. Dean Davis and Kiva had been discussing potential ways in which a future USF-Kiva partnership could take shape. They discussed the possibility of USF School of Management students joining the Kiva team for internships and project-based work, such as market research and impact analysis.

“USF students, staff and faculty can get involved in so many ways, whether it’s in the Kiva Fellows program, or the Kiva Internship program or engaging both of our communities and fostering more connectedness,” Shah said.

A hundred years from now, people are going to look back and say that was the time in history when all of humanity was connected. And I mean literally connected. It’s up to us at Kiva and USF to make those connections purposeful.