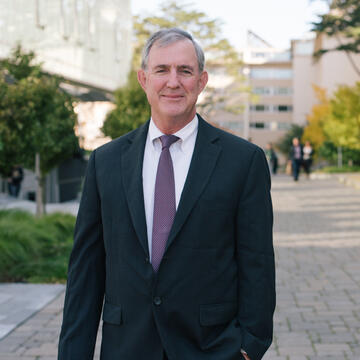 He has also served for three years as the Faculty Representative to the USF Board of Trustees, 2012-2015, Director for the Change the World from Here lecture series at USF, 2012-2013, and Chaired the Department of Public and Nonprofit Administration for three years.

Callahan’s research, consulting, publications, and teaching focuses on leadership behaviors and strategy practices that are effective in complex, demanding and dynamic environments in the public and nonprofit sectors.

Callahan was elected as a Fellow for the National Academy of Public Administration Standing Committee on Intergovernmental and Federal Systems in 2017.

He is the current Editor in Chief of the International Journal of Public Leadership, a peer-reviewed journal. published by Emerald Press, United Kingdom. He was a visiting researcher at Oxford University, 2016 and was appointed the Visiting Scholar 2017-2018 for the Center for California Studies at the California State University, Sacramento.

His recent publications include editing and writing chapters in the book, Public Health Leadership: Addressing Population Health and Social Determinants (2017) and a chapter scheduled for publication in the book Financial Sustainability and Intergenerational Equity in Local Governments (2018).

Dr. Callahan was awarded Graduate Program Teacher of the Year, 2013, in the USF School of Management. At the University of Southern California, School of Policy, was voted by the Graduate Student Association as the Teacher of the Year in both 2010 and 2007. He received the 2010 Newland award for Outstanding Educator, Sacramento Chapter and the 2011 Scoville Award for Outstanding Educator, Los Angeles Chapter of American Society of Public Administration.

Starting in 2000 Callahan has been Co-Director of the Sierra Health Foundation Leadership Program. Dr. Callahan and Kenneth W. Kizer, MD, Director of IPHI at University of California Davis Health Center are also the lead consultants for the Milbank Memorial Fund for state legislators and executive staff from over 20 states.

Dr. Callahan co-authored a national award-winning article, receiving the Brownlow award for best article from Public Administration Review. He has been published in journals such as Public Management Review, Public Manager, Government Finance Officers Review, The National Civic Review, and Journal of Jesuit Business Education. He was Executive Producer and Assistant Director of the documentary Solving the Inequality. He received a Fulbright Specialist Program grant in 2011 for lectures on public institutions at Aydin University in Istanbul, Turkey.

School of Nursing and Health Professions

Department of Public and Nonprofit Administration, School of Management