Impacting Society Through Shelter and Tech

Bachelor of Science in Management student John DeLeon '18 sparked the idea for a project that won top recognition with AngelHack 2017.

USF student DeLeon joined teammates Julie O’Dwyer and Israel Soto to create Shelterspace, an app that won top 15% recognition out of more than 1000 projects at AngelHack. The Shelterspace app idea is to provide real-time updates on bed availability at local homeless shelters. DeLeon recently presented the app at Global Demo Day. DeLeon started his journey in USF’s BSM program after moving to the Bay Area from Austin.

"I wanted to come (to the San Francisco Bay Area) because I know a lot of things start in San Francisco and there are a lot of opportunities to have an impact. ... I wouldn’t have even known about the conference for the hackathon had I not been at USF, and it was very apparent that social impact is at the forefront of everything about this school."

AngelHack, a company founded by CEO Sabeen Ali, a USF Master of Science in Organizational Development ‘09 alumna, presents the hackathon. Tech4Good allows students and entrepreneurs to come together and create a startup over the course of a weekend. 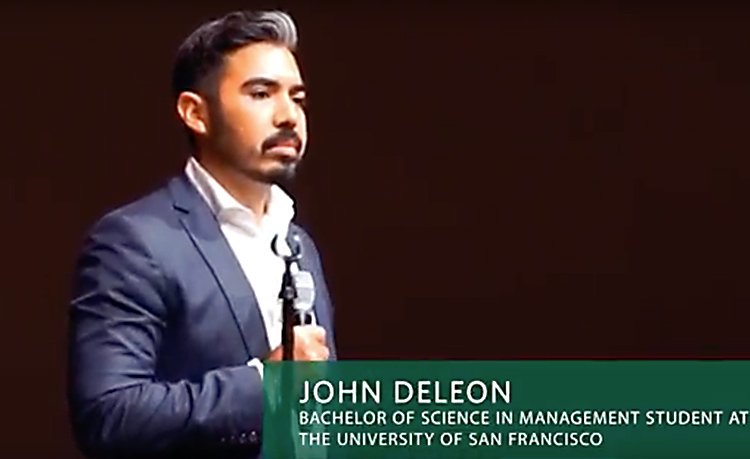 DeLeon said, “I wouldn’t have even known about the conference for the hackathon had I not been at USF, and it was very apparent that social impact is at the forefront of everything about this school.”

As for DeLeon’s colleague, O’Dwyer, she had only been living in San Francisco for a month after moving from Dublin, Ireland, when she attended the Tech4Good conference. There, DeLeon proposed the concept of Shelterspace to attendees, thinking that no one would join his team, but when O’Dwyer heard his ideas, she knew she had to talk to him. DeLeon said, “Both of us shared the common experience of being taken aback by how desperate the homeless situation here is and how harrowing it is.”

Public Relations and Media Relations Manager at AngelHack Kelsey Ruiz explained that Tech4Good is a hackathon unlike others, since usual hackathons award winners with prizes or swag. “At the Tech4Good hackathons, we see an entirely different demographic come out. They’re not motivated by cash prizes, they’re motivated by actually creating something that can solve something within their local city.”

Neither DeLeon nor O’Dwyer had competed in a hackathon before, but they joined forces and Shelterspace ended up being the winning project.

Next, Ruiz said 50 out of 1,000 projects were accepted into what is called the HACKcelerator--a cohort that allows startups from all over the globe to continue working on their company. From there, only a small percentage was selected to give a pitch for their startup at AngelHack’s biggest event of the year, Global Demo Day, this year only 16 teams were featured, one of which was Shelterspace, which also happened to be one of two Tech4Good teams. The prize of the night was an AngelHack crown. Ruiz explained, “It’s a night where almost anyone can win,” as all the teams have numerous opportunities to meet and network with a variety of business executives that attend the event.

As for Shelterspace itself, to those that may ask, “How would those in the homeless community have access to the Shelterspace app?” O’Dwyer explained, “A majority of homeless people have smartphones, and then there’s obviously the resource centers and libraries.” DeLeon said, “It serves not only the homeless community which are the primary people that it serves, but it also serves the people who are trying to help them.”

Right now, their focus with the Shelterspace project is moving forward. “We’d love to be doing this full-time,” said O’Dwyer. Within the next month, the Shelterspace team is planning on launching their pilot program. DeLeon highly encourages anyone in the Oakland Alameda County that is interested in helping should contact the team. He emphasized how much this project relies on the community. “We need communities, different cities, counties to make this happen because ultimately, they’re going to be the ones who either keep [Shelterspace] updated or not, and the survival is dependent on those partnerships with the folks in the community.”

Although they did not win the Global Demo Day AngelHack crown, O’Dwyer said their goal for the event was to receive funding, mentorship, and strategic partnerships, but also have the opportunity to spread awareness regarding the issue of homelessness. “There are a lot of people that are so desensitized to the issue and it makes them a little uncomfortable to talk about,” said O’Dwyer. Yet she assured “We’re not going to let this fade into the background. We want to keep bringing this issue to the forefront of people’s minds.”