In front of an audience of about 100 at Google’s San Francisco office, award-winning science journalist and USF professor Moira Gunn ’70 talked about starting her popular NPR radio show at USF, interviewing Google’s founders before “Googling” was in the dictionary, and why women should follow their passions, as part of a university-sponsored event on women’s leadership April 26.

“Just like Larry and Sergey, don’t listen when they say you can’t do something,” Gunn told budding women entrepreneurs and executives, in an interview and audience Q&A led by former Intel CEO Paul Otellini ’72.

Gunn was talking about Google founders Larry Page and Sergey Brin, who she’d interviewed on her NPR program Tech Nation when the company was still in its early stages, and the pair was struggling to convince the world that the internet needed another search engine.

Though she offered up the Google founders’ perseverance as a source of inspiration, Gunn’s own story as a leader in tech, science, and biotech was what drew the crowd of USF students, alumni, and supporters. Gunn was the first woman to earn a doctoral degree in mechanical engineering from Purdue University, she worked as a NASA scientist, and in 2011 she won the National Science Board’s Public Service Award for her contributions to the public’s understanding of science and engineering, thanks to her radio show.

She started the show on USF’s KUSF radio station more than two decades ago, and then took it to KQED — where it is broadcast to a national audience.

Gunn, now an assistant professor and leader of USF’s Loading..., often uses the show and her conversations with tech and biotech leaders as material in her classes.

Alice Reeve ’07, an undergraduate alumna and first-year MBA student in the Loading..., was inspired by both Gunn and Otellini, who had achieved so much after graduating from USF.

“It gives a greater value to my degree to see that these people have come to USF — and that I could one day be like them,” Reeve said.

The event was sponsored by USF’s Women in Leadership & Philanthropy initiative. 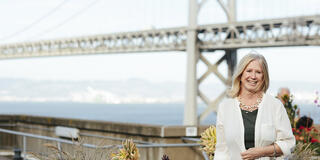