How a love for racing opened the door for Dean Karnazes MBA ’99 to become an entrepreneur, philanthropist, and New York Times bestseller

Dean Karnazes MBA ’99 once ran 50 marathons in 50 states in 50 days. He’s also run across Death Valley, braving 120 degree temperatures, and to the South Pole, where it was 40 below.

How’s this possible? Karnazes is something of a superman, according to Dr. Anthony Luke, director of the Human Performance Center at UC San Francisco. “I don’t know of anyone who has logged as many miles as Dean has,” says Luke, who has studied Karnazes.

Part of Karnazes’ success comes from his body’s ability to produce less lactic acid during prolonged exercise, meaning his muscles are more resistant to fatigue than most people’s. But another component is mental toughness and persistence — something we can all strive for, says Luke.

Karnazes has used those qualities to become one of the world’s best-known ultramarathon runners and a health and exercise guru — writing The New York Times bestselling memoir Ultramarathon Man: Confessions of an All-Night Runner and giving motivational speeches at companies like Amazon and Starbucks.

Karnazes always knew he had a knack for running, but he didn’t know quite how incredible his ability was until his 30th birthday in 1992. He was at a San Francisco pub with his friends and feeling worn out by his corporate job in marketing. As he reflected on his life, he realized he’d been happiest in high school — when he was on the track team. At midnight, he decided to set off on a 30-mile run, to celebrate his 30 years. He ran through the night and ended up in Half Moon Bay.

After that revelatory run, Karnazes began training and entering races. He decided other life changes were in order too and applied to USF to get his MBA, hoping to learn the skills to start his own business.

“At USF I learned how to create articulate presentations. I drew on those public speaking skills when I was looking for investors for my businesses,” says Karnazes, who founded a health food company and a yogurt shop after graduating.

He sold the businesses and, using the money he earned, became an investor himself. Now he supports athlete-oriented companies like snack food company Health Warrior and elliptical bike manufacturer ElliptiGo. He’s also a philanthropist: Karnazes’ foundation Karno Kids contributes to nonprofits that promote healthy and active lifestyles for children.

Karnazes will be running the SF marathon in July, not once but twice. He, along with a group of about 100 running enthusiasts, will begin the race in the middle of the night, but heading in the opposite direction. They’ll reach the starting line around the time the official event begins, then turn around and do it again. Each runner will be raising $2,000 for charities of their choice, including Karno Kids.

Of all his feats, Karnazes says a recent run with his daughter was the most memorable.

“I ran a 10K with my daughter on her 10th birthday,” he says. “To watch her do something I thought she was incapable of doing, and to pull it off, it just greatly impressed me.” 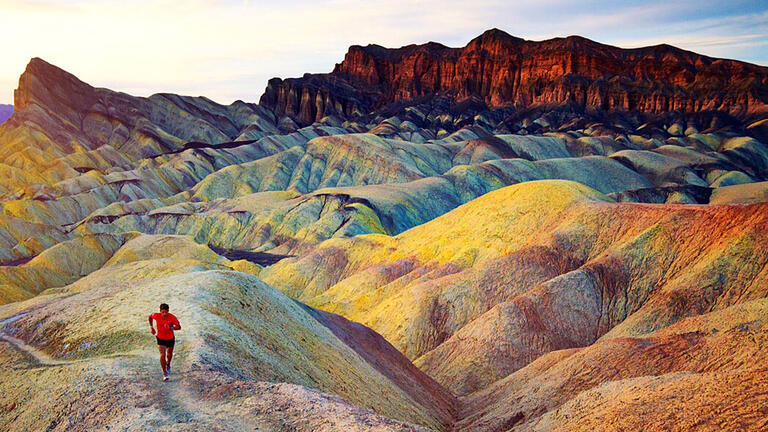