Where in the World Are USF Alumni? Opportunities for Grads Don’t End After Commencement 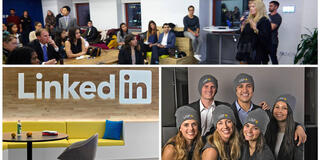 What do an intimate dinner in Chicago with an NBA legend, a private tour of Seattle’s Bill & Melinda Gates Foundation and a “Rock Your Profile” professional photo shoot in the Empire State Building have in common?

They’re all events put on in the past several months by USF School of Management Alumni and External Relations Department.

The School of Management alumni network at USF boasts over 40,000 grads from many different areas around the world including Los Angeles, New York, San Diego, Seattle, Portland, Washington, D.C., Chicago, China, India, Turkey, the Gulf countries and many more.

Because over a third of USF alumni reside outside of the Bay Area, a number of city- and country-based chapters have been created. These alumni chapters make it possible to stay in contact with one another as well as invite each other to specific alumni events.

All Things Basketball and More with Bill Cartwright in Chicago

Basketball fan or not, meeting a former NBA center and head coach can’t help but be inspiring. Alumni in Chicago were fortunate enough to have dinner with NBA legend Bill Cartwright, who played on the NY Knicks, Seattle Supersonics and Chicago Bulls and is former head coach of the Bulls--not to mention, he’s a former star USF Dons Basketball player. Cartwright was able to talk with alumni about his experience on and off the court at USF and in the NBA.

Chloe Chen, an MBA alumna in Chicago said, “The event was heartwarming. It was wonderful to meet an alumnus like Bill Cartwright. I am so thankful for our school for organizing an event like this where I had the chance to meet USF alumni that are in the Chicago area so that we can help each other in the future if need be.”

Behind The Scenes at the Bill & Melinda Gates Foundation in Seattle

Collins, who attended as both an alumna and part of the foundation said, "It was great to meet so many Seattle-based alumni who were interested in learning about the work we do at the Bill & Melinda Gates Foundation!

The MNA program was life-changing for me. Aside from gaining knowledge in the nonprofit sector, I made great connections and developed a stronger sense of community. -Alumna Susi Collins

The goal? To show alumni that anyone has the ability to inspire others to change the world--just like they are doing through their work. Alumni had the chance to meet with three current foundation employees and heard about their journeys to the foundation and what inspires them to be there. A tour around the LEED Platinum Certified Gates Foundation campus was an added bonus.

Rock Your Profile at LinkedIn in New York City

Another amazing opportunity for USF alumni was held this past November in New York. Over 100 alumni spent the evening at LinkedIn's office in the Empire State Building. Guests were able to learn about the culture at LinkedIn along with what their four lines of business and strategy are. Also, a “Rock your Profile” booth was set up where a professional magazine photographer took headshots so that alumni could re-vamp their profile pictures.

Carrie Smith, who received her MBA in Marketing from USF in 2011 and is a Marketing Manager, (Acquisition and Customer, Talent Solutions) at LinkedIn, helped host this event. “Everybody that attended learned something about LinkedIn, something about their profile, and how they can use LinkedIn to find a job, source a job and get in front of people.” Smith is hopeful that the Chicago office will also be throwing another “Behind the Scenes” event because it was so successful.