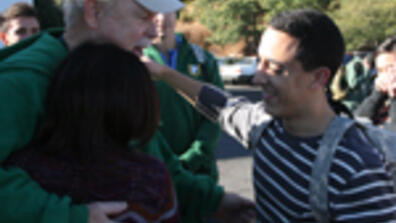 Dave Griffis, Adjunct Professor teaching Business Law at the University of San Francisco’s School of Management, has received the Kappa Alpha Theta Fraternity’s Outstanding Faculty Member Award for the 2013-2014 academic year. Over 110 applications were received from chapters across the United States and Canada so this is a significant honor. But what makes a faculty member truly outstanding?

“My life, like everybody else’s life, is filled with circuitous paths,” Griffis says.“I’m still speechless. This was so out of the blue. It’s such an honor in a lot of different ways. This is a phenomenal university and being in a place such as this where you get recognized is one way I’m honored. I’m just a small cog in a big wheel.”

For the past ten years as a professor, Griffis has served the USF community by teaching Jesuit traditions embodying the significance of human connection. “I get emails at least twice a week of past students asking if I’m still around. Some want to grab coffee with me, other times it’s lunch. I just received a Save the Date from a former student who invited me to her wedding in Idaho. I tell my students that I get so much more from you. I have a law practice and I’m there 5 days a week and will soon be semi-retired. My partners always tease me and tell me they wish I would come in just as energized as I do when I come to USF. My wife can tell when I’ve just come home from teaching. I have a different energy. I have such a positive experience when I’m here. Education is a win-win. Unfortunately, in law, it’s zero-sum. There’s a winner and there’s a loser. There will always be someone who is disappointed, but not in education.”

Griffis first became a student at USF in 1969. He then joined the Army Reserves in the '70s and in the '80s he went to work for the San Francisco Police Department. In 1990, Griffis returned to USF to attend law school. “I started teaching here in 2004, or so they tell me,” he says with a laugh. “I’ve been here for six different decades. For me, USF really does mean ‘you stay forever.’ ” 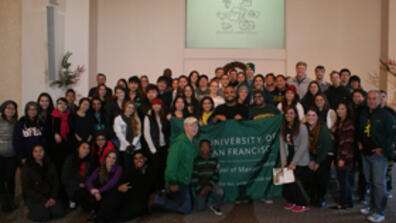 Griffis taught when he was in the Reserves and when he worked for the police academy. He stated he’d forgotten how much he enjoyed teaching until he got a call one day from the late David Scalise in 2004.“David was my TA back in 1969. He and I had become good friends and he called me up one day and said, ‘Listen. They need someone to do a Tuesday/Thursday class here at USF. They need you.’ I’ve been here ever since 2004. This has been my premier position. My blood is green and gold.”

Griffis attributes his success as a teacher to the professors he had while he was a student at USF. “I stand on the shoulders of giants. I’ve taken what they’ve taught me - their principles, their philosophies, their ideas - and have put them into my classroom. I’ve been really lucky to have had so many inspirations while here at USF, but Father Eamoon Barrett and David Scalise are my key inspirations.”

While Griffis was a sophomore, Father Eamoon Barrett was his labor management professor. “He used to say, ‘It’s not what you have at the end of the day. It’s what you share along the way that counts.” Barrett’s Jesuit principles deeply affected Griffis throughout his academic career and well into his professional life. “Barrett had this curious personality and part of the education we receive at USF is to appreciate the importance of helping others. We know that it is not just us. We are part of a community and we have a commitment to serve as active members of that community. That’s stuck with me ever since.”

Post by University of San Francisco School of Management.

“Scalise is my second inspiration. He told me that education starts in the classroom. It doesn’t end there. He prompted me to go out and take some risks.” Griffis currently teaches business law and during each semester he offers an extracurricular off-campus service learning opportunity. “I try to teach law in the sense that it is a community. I give the students ‘Black Letter Law’ or ‘The Rules’ and then I introduce, as one of my students put it, ‘The Cardinal Law.’ You reap what you sow and you pay it forward.” 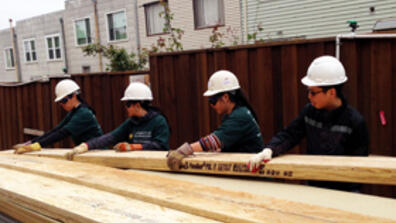 Griffis has been involved with various organizations and participates in different activities that spark compassion. Recently, he participated in the ALS Ice Bucket challenge. During the spring semester, Griffis organizes April Action, which is an opportunity for students to help build houses by partnering with Habitat for Humanity. In the summer term, students have the option of volunteering with beautification projects around the city, and for the fall semester Griffis joins forces with Bill Hamm to help serve the community in Novato, CA through Warm Wishes, a Bay-Area non-profit. Students help with the organization’s annual giving season event by assisting with their backpack campaign. Students deliver 5,000 backpacks filled with warm outerwear to those underserved communities. “Last year, I had a total of 120 students. That’s current students, former students, parents of students, and for the first time I had children of former students come out and help. That’s what USF gives me. The students are so engaging and wanting to help others. They’re open to it. For my international students, this may be the first time they’re doing something like this. It breaks down barriers but it also gets students outside of the classroom to serve others. It brings us together in a completely different environment.”

That positive environment and win-win attitude comes from Griffis’s ability to successfully engage students. “I have the opportunity to engage the students. I get them during their upper division years so they’ve been exposed to the Jesuit traditions of the University. They come ready to learn. They come ready to take measured risks and are willing to try new things not only inside the classroom but outside as well. This school offers a trusting, respectful environment where students are able to grow as a whole person. I love my job but it’s bittersweet. It’s bittersweet because they graduate. You build these connections and a strong relationship with these students and then they leave. You've got to let them go. But then they come back - that’s the joy.”