From Google to Genentech: A View From the Other Side of the VC Table 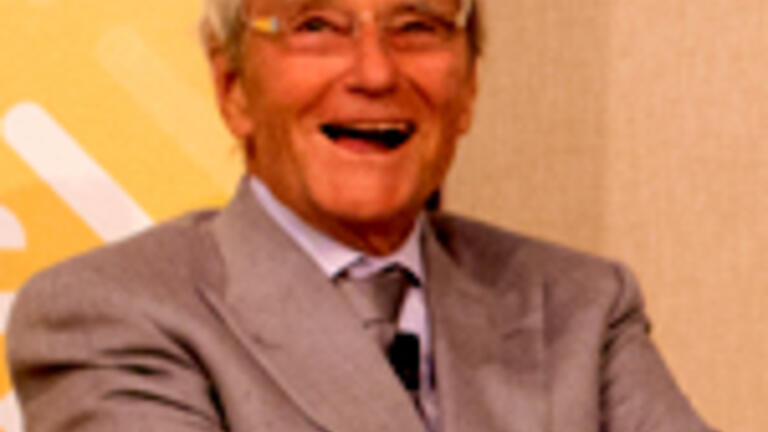 The USF School of Management invited billionaire venture capitalist Tom Perkins for a speaking engagement, which sold out within hours of being announced. Perkins was the subject of much controversy during the past few months because he wrote this letter to the Wall Street Journal in which he compared the persecution of the wealthiest 1% of Americans to Kristallnacht, or Night of Broken Glass, which was a series of attacks on Jews just before the start of World War II. To this day, his is the most-read letter in the Wall Street Journal.

Perkins has since apologized for the poorly chosen analogy, but at a recent speaking engagement at San Francisco’s Commonwealth Club was subjected to an angry audience. On this particular night at USF, he took the wind out of any potential hecklers’ sails by mentioning the controversy as soon as he walked on stage. “Yes, it was a bad analogy, and I’ve apologized for it,” Perkins said, “but I do stand by my opinion that the 1% are being unjustly persecuted. [The evening at the Commonwealth Club] was exciting, to say the least, but luckily I escaped without too much damage to my clothes or person. I hope that there will be slightly less excitement at this venture capitalism talk tonight.” 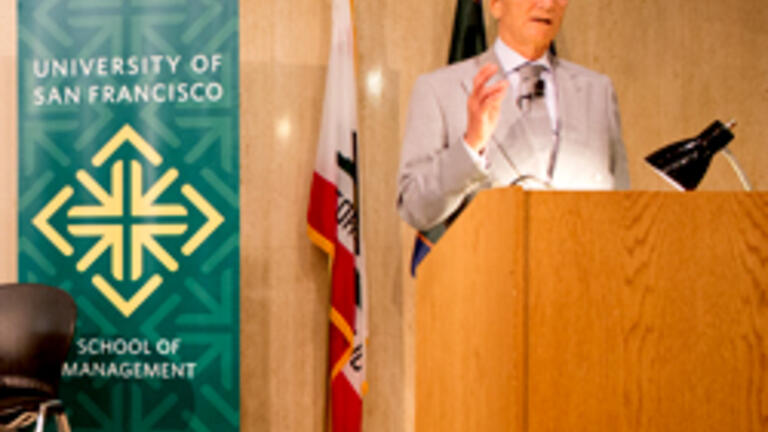 Perkins is undoubtedly charming, and very intelligent. He entertained the audience with stories of tech CEOs from before they were famous, including an account of Bill Hewlett (of Hewlett Packard) beating him in poker and winning a full month’s salary off of him, after which Perkins had to sustain himself on cat food for three weeks. “I’m totally serious about the cat food,” said Perkins. “That’s when I learned that the second-best hand in poker is the worst hand.”

“What advice do you have for current business students?” one student asked. “I have three pieces of advice,” said Perkins. “One, don’t go to Wall Street. Two, don’t go to Wall Street.” The audience laughed. “And three, find a medium-sized company that you think is beautifully managed and go work for them,” said Perkins. “A well-run, decent sized company – so not a startup, and not a giant – and with the founding CEO and the founding owner both still there. Then go and learn all you can from those people about business that is ethical, lucrative and fun.”

After getting his MBA, Perkins went to work for Hewlett Packard. “In 1957 I wrote to Dave Packard and asked him for a job, and he had me come over to the convention center in New York where they were presenting, to help him build a booth,” Perkins said. “I did a good job and they hired me. I was the first MBA they’d hired, and most of the guys at HP were skeptical. I worked in the machine department for months. I damaged a lot of parts.”

Packard became Perkins’s mentor during his time at HP, encouraging him to work on his interests like lasers in his spare time. “He was my mentor and my hero,” said Perkins. “We became great friends and stayed that way until his death. I learned everything I know about venture capital from him.”

After his time at HP, Perkins went into venture capital. He and his partner, Eugene Kleiner, initially collected an investment capital of $8 million, which at the time was the largest venture capital fund in the world. “We created this thing we called the ‘Investors’ Bill of Rights’,” Perkins said. “It was a list of 10 items, because we felt like it should be 10 things. It included promises such as we wouldn’t invest in anything personally that the fund couldn’t invest in also, and we wouldn’t take money from unknown sources, which was code for ‘the mob’. It kept our investors happy.”

Perkins and Kleiner changed venture capitalism from a distant funding-only endeavor to a more closely connected business practice. They believed in becoming actively involved with the companies they invested in, giving them business advice, restructuring them, spending time on the Board of Directors, and continuously guiding them towards more growth. “I believe in three things when it comes to venture capitalism,” Perkins said. “One, you should seek extreme risk. If you don’t have extreme risk, you’ve already missed the boat, and someone else is on it. Two, you’ve got to structure the business, your investment, as you see fit. Three, manage the venture as you put more money in, and continue to do so over years. Don’t just be on the board, be the chairman of the board. Bring in knowledgeable friends whom you respect, to sit on the board with you. Plan to be in it for the long haul.” 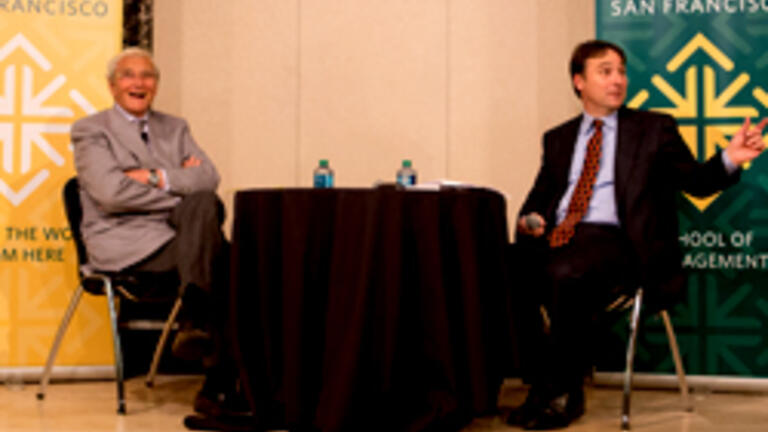 When asked what advice he had for business students who are looking to work in the tech sector, Perkins urged them not to just write code or apps. “Kids come to Silicon Valley to ‘start up’, but they’re not entrepreneurs,” he said. “They’re well-paid programmers. And they’re certainly not developing their leadership skills. And if you’re out on your own and you’re writing apps, your only road to liquidity of an app is to sell it, and once you do you haven’t learned how to manage, or hire and train people. An app is not a business, and you won’t be capable of starting one.”

Finally, Perkins warned against the dangers of another dot com bust. “We’re in the midst of a venture capital phenomenon,” he said. “A worldwide boom that’s centered around Silicon Valley and San Francisco. Facebook paid $19 billion for WhatsApp, a company of 40 people. That, to me, is a signal that the bubble might burst.” He said that monetary policy in the US has historically artificially depressed interest rates, and combined with angel investors who invest capital into companies without being actively involved in how the companies are run, this is dangerous. “Back in the early 2000s everyone thought they could get out of their investments before the bottom fell out,” he said, “but if there’s no buyers…” He smiled. “A cruel joke from that time is how do you get the dot com CEO off your doorstep? Just pay for the pizza.” 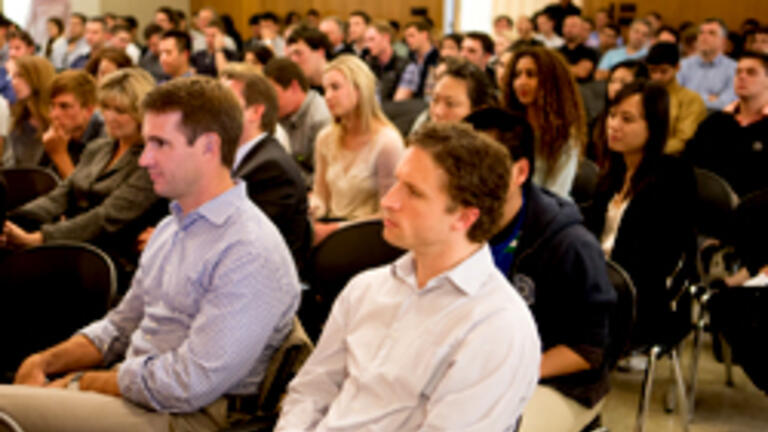 Perkins & Kleiner invested in hundreds of different companies, one of their more famous being Genentech, which Perkins looks back on silimost fondly because it was not only lucrative but was working to help people. “Making human insulin by bacterial processes, it was so new and so very, very risky,” Perkins said. The solution to the financial risk was to farm out various aspects of the scientific work to different universities, who would each be responsible for just one aspect of the process and could therefore concentrate on it fully. During his time on the board of Genentech, Perkins helped raise $3.5 billion for genetic engineering. “We made a lot of money and we saved a lot of lives,” he said.

The Business and Finance Speaker Series is run by Associate Professor Ludwig Chincarini, who teaches Financial Analysis and Business Administration at the School of Management. Chincarini lengthily described Perkins’s whirlwind career and great business acumen. “This man is more than a venture capitalist,” Chincarini said. “He and his business partner created venture capitalism as we know it. In business, he represents what we should all strive for: to be smarter, work harder, and make things better for everyone.”