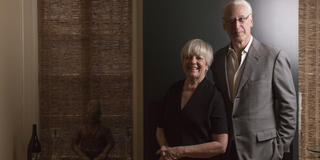 Alan Davis and Mary Lou Dauray feel a connection to the University of San Francisco that is broad and deep and traces back to a childhood friendship — and also includes their delight at living in the same neighborhood as the university.

The couple, through their foundation, has recently given $1.5 million to USF to support both the Harari Conscious Leadership and Social Innovation initiative and the Litvak Social Innovation Scholarship for underrepresented students.

The social innovation initiative is a program in the School of Management that will focus on teaching socially responsible leadership and investment. The program is named for former SOM faculty member Oren Harari, who died from brain cancer in 2010.

Alan Davis first met Oren Harari when they were 12-year-olds on a tennis court in Hollywood, Florida. Their friendship continued over the years, and they both ended up in San Francisco.

It was Professor Harari’s death that prompted Davis to consider a gift to USF that would honor the late educator’s commitment to social innovation and socially responsible leadership.

“Oren was really happy at USF and seemed to relish his relationship with his students,” says Davis.

“My daughter is a graduate of the USF School of Law, and we can see USF from our home,” Davis continued, waving toward his backyard. “We, too, feel connected to the university and the students.”

A Commitment to Higher Education

Davis and Dauray give to other universities, including Hebrew University, City College of New York and the USC School of Gerontology. “Normally, we try to push the envelope at these larger institutions,” says Davis. For example, at Hebrew University, they have established a Feminist International Relations program. Each of their endowment gifts requires the institution to invest the funds in a socially responsible manner.

“We didn’t have to try so hard at USF, because our ideas on socially responsible leadership are mirrored at USF.”

Alan Davis says he was pleased to learn that School of Management Dean Elizabeth Davis, who had only recently arrived at USF, was totally committed to programs where future leaders are educated to think critically and respond compassionately to social, environmental, and economic challenges.

Her enthusiasm inspired the couple to develop a second gift — this one geared toward scholarships for African American and Latino students to partake in the social innovation initiative.

The scholarship fund is named for Larry Litvak, who has worked with Alan Davis for three decades in the managing, financing and governing of organizations pursuing social change. He teaches at Stanford University.

Dean Davis said the new initiative supports teaching innovation and leadership at the School of Management.

“Alan and Mary Lou's generous gift to the School of Management in memory of Oren Harari emphasizes one of his key messages — reflective and purposeful leaders who foster a focus on social innovation in their organization's culture, resulting in strategic high performance,” she says.

“We are grateful for the support to our students who will benefit from curriculum, projects, and academic activities, which reinforce leaders who are invested in returning greater stakeholder value in their companies,” adds Dean Davis.

New Era of Hope and Leadership

Alan Davis and Mary Lou Dauray have been married 10 years, having been together 25 years. Dauray is an award-winning environmental artist, as well as an interior designer specializing in and promoting universal-designed homes that are accessible to older people and people with disabilities. She serves as vice-president of the Leonard and Sophie Davis Fund and runs its Arts Initiative. Davis is president of the Fund, a family foundation established by Alan’s parents.

Together, Davis and Dauray are a force for change. And, they hope their support of USF creates change, too.

“We believe that the students will gain self-confidence through what is taught at the school,” says Dauray. “Especially in view of what’s happening today, it takes education, motivation and courage to effect positive change.”

For Davis, it’s all about hope.

“Mary Lou and I talk a lot about hope,” he says. “We want to help create a new era of hope and leadership. We still have a shortage of leaders with the kinds of values we need. The goal is to establish these kinds of leaders.”