Rachel Stone ’06, MPH ’13 needs to get something off her chest and not just, as she calls them, her “ticking time bomb breasts.”

Stone has a genetic mutation that puts her chances of developing breast cancer at 70 to 80 percent. This August, the 30-year-old nursing student made a difficult but potentially life-saving decision: She had both breasts removed.

The decision led to her going public with her story, a move she hopes will save lives.

October is Breast Cancer Awareness Month. Twelve percent of women in the United States develop breast cancer. Learn more about prevention at Susan G. Komen for the Cure and the American Cancer Society.

The test she’s talking about confirmed that Stone has a BRCA gene mutation, which dramatically increases the odds of developing breast and ovarian cancer. Actress Angelina Jolie made BRCA famous last summer, when she wrote about her double mastectomy in The New York Times. Inheriting a mutation in one of the two breast cancer genes — BRCA1 and BRCA2 — is rare, just one in 400 American women have a BRCA1 mutation, and one in 800 have BRCA2 mutation.

When Stone’s doctor, a BRCA specialist, reviewed her medical history, she saw some clear risk factors. Stone had a family history of cancer. Her grandmother, a spunky woman with a larger-than-life personality, had survived the Holocaust but succumbed to ovarian cancer. And, as an Ashkenazi Jew, Stone’s likelihood of inheriting a BRCA gene mutation was more than ten times that of the general population.

At 23, Stone was tested and learned she had a BRCA2 gene mutation. That meant that more likely than not, she would battle cancer at some point in her life. Several years later, she decided to undergo a preventive double mastectomy.

What started as a very personal and painful choice has become an opportunity for advocacy for Stone.

“My gut instinct, especially after my public health program at USF, was to take my story public,” she says. “The whole point of public health is prevention, and if I can help one person who didn’t know anything about this through my story, it’s worth it.”

And so in the lead up to her mastectomy, Stone started blogging about her Funky Genes. She writes with humor and candor and is not afraid to get personal. She chronicles her nightmares about the pain and recovery, her challenges of dealing with insurance companies, and what it’s like to choose implants.

As her following continues to grow, her message is getting across. Her Twitter page had more then 4,100 views one week. Strangers have reached out to her to thank her, and people she knows have said her blog inspired them to take care of medical needs they had put off.

“Surgery and even getting tested is not right for everyone,” Stone says. “But if I can help one person by sharing my story, I’ll feel really great.” 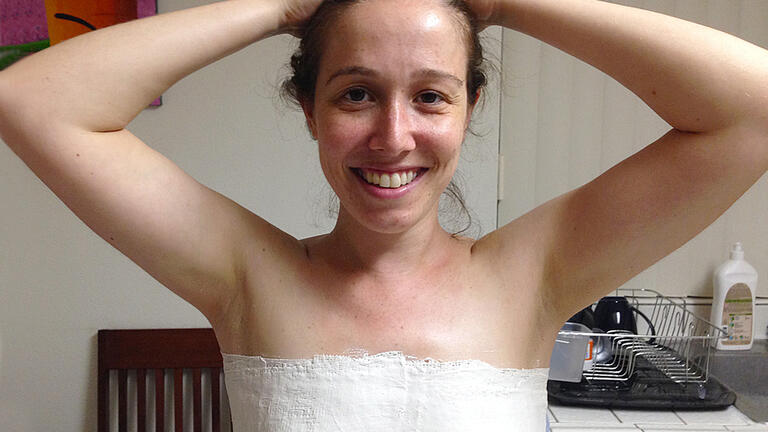 Rachel Stone '06, MPH '13 memorialized her breasts with a mold, before she underwent a double mastectomy in August.
more news