Bringing More Women to the Table 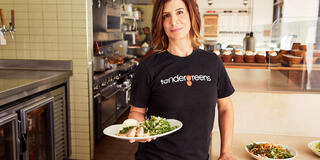 Bruno, the CEO of fast-casual restaurant chain Tender Greens, has pledged that by the end of 2020 half of the chain’s top restaurant positions — executive chefs, managers, and sous chefs — will be filled by women.

She is changing an industry that is notoriously male-dominated at the top levels — estimates place the number of women executive chefs nationwide at anywhere from 15 to 25 percent.

“I’ve made such a statement about doing it instead of doing it quietly because the current situation is a result of a perpetuating cycle — people hired into roles hiring other people like them,” Bruno said. “The only way to break that cycle is to really create a strong force in the opposite direction and to sort of artificially move that needle.”

To do so, Tender Greens has created a leadership training program for which any employee, male or female, from entry-level on up can be recommended by regional executive chefs. Female staff members are encouraged to nominate themselves for the program.

Within a year of entering the program, each employee learns every station in the restaurant, from cashier to salad-making to prep cook and more, and then moves to learning the sous chef and restaurant manager roles. From there, they learn how to be executive chefs so they’re ready to take on that role as openings arise.

In Bruno’s view, reaching gender parity isn't only the right thing to do; it also makes good business sense. Numerous studies, she says, demonstrate that diverse businesses are more successful, and that holds especially true for businesses that deal directly with consumers.

Tender Greens has 30 locations in California, New York, and Massachusetts, and is poised to expand even further. To do so, Bruno said, Tender Greens needs trained people to open new restaurants. Already, about 60 percent of the company’s sous chefs, almost 50 percent of restaurant managers, and close to 40 percent of executive chefs are women.

“Somebody might say, ‘Why would you intentionally target women versus just hiring the best person?” Bruno said. “I think the naiveté of that question is that people don’t necessarily self-select if they don’t see other people like them in those roles. This training program allows us to identify people we think would be great for the role, tap them for this training program, and then it really puts the power into our hands to decide what the makeup looks like.”

Bruno, who joined Tender Greens in 2017, has plenty of business experience. She launched the first 25 Apple stores and opened 55 locations of Drybar, a California-based hairstyling company, and has helped other companies grow.

Her work at the restaurant company “will move the needle for women in the restaurant industry and beyond,” said investor Danny Meyer, founder and CEO of Union Square Hospitality Group.

“When I was at USF, I was working at Apple so I was really in the state of mind of, ‘Do things need to be done the same way? Is the goal to implement the same skills and styles that everyone else has done, or is there something about trying to find a new way?’” Bruno said. “There are professors at USF who helped me believe, or gave me the confidence to believe, that doing things differently could potentially improve even the most successful businesses.”