Wrongful Convictions: The Repercussions of Misidentification 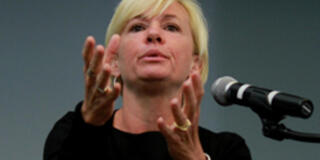 “Ronald Cotton, the man I had prayed to die, would be the man who would teach me to live,” said Jennifer Thompson, criminal justice reform advocate and author of the New York Times Bestseller Picking Cotton. Thompson was the featured speaker at the Eyewitness Identification Best Practices Symposium on May 21st, at the University of San Francisco, co-hosted by the USF International Institute of Criminal Justice Leadership and the Northern California Innocence Project through Santa Clara University’s School of Law.

Thompson told her story to an audience of leaders in the field of criminal justice: police officials, district attorneys, and those in academia who serve San Francisco and the Greater Bay Area.

On a hot July night in 1984 in Burlington, then senior and 4.0 student at University of North Carolina Chapel Hill, Thompson’s life forever changed. “I knew I would be raped but I did not know if I would live,” she recalled. Thompson was raped at knifepoint by a man who broke into her apartment while she slept.

The week before that traumatic night she remembered a conversation she had with her sister about what they would do if they were ever raped. She explained to her sister that she once heard if you stay calm you may live. The night of the attack, that conversation was so vivid in Thompson’s mind. “Stay calm, Jennifer. I told myself. Stay present. Don’t leave your body and while he’s raping you pay attention. I looked at the color of his eyes, his eyebrows, his nose, what his hair was like, if there were any tattoos, any piercings, how tall I thought he was, how much I thought he weighed. I would try to remember everything within those fleeting moments because I would be asked to describe what he looked like and that I would need to identify him."

Thompson survived the attack, and eventually positively identified Ronald Cotton as her attacker. Cotton pleaded his innocence, insisting that she was mistaken. But because of Thompson’s positive identification and her compelling evidence, Cotton was placed behind bars for eleven years. He was later allowed to take a DNA test that proved he was wrongly accused. The DNA belonged to a man named Bobby Poole. Cotton was released, after serving more than a decade in prison for a crime he never committed. Two years later, Thompson and Cotton met face to face and she asked him if he could ever forgive her. To her surprise he said, “I forgave you years ago. I want you to have a good life and I want to have a good life.” Because of Cotton’s grace and forgiveness she explained, “I was able to see him and learn forgiveness, and I was able to forgive Bobby. It was about taking back my life. It was about finding my voice again.” After discussing their lives with each other after all those years had gone by, Thompson realized, “We had shared this parallel journey of being victims of a system that is flawed.”

Thompson’s case serves as a striking example of the repercussions of misidentification. For Thompson, her attempt to translate her memories into usable information to assemble a composite sketch was fallible. “Raise your hand if you have a mom,” Thompson said. The audience laughed. “You’ve seen your mom thousands of times. But if you were asked to describe your mother’s nose or to choose from 12-15 different eyebrows in an identity kit, you wouldn’t be to do it. You can’t compartmentalize the human face. You might have a likeness of a person, but not the actual person. That’s the way our brains form information, our brains can’t do it well.” When the police presented her with a composite sketch and was asked to choose from the line-up, Thompson wrongly chose Ronald Cotton. This identification was then verbally affirmed by the police in pre-trial proceedings, thus Cotton’s face was firmly set in her brain as the person who raped her.

“Once we contaminate a person’s memory there is no way to decontaminate it,” Thompson said. “It’s like walking in freshly fallen snow. And the next day when the new snow falls on top, you can still see your footprints. There was nothing but pure intent in trying to get a rapist off the street. We just got the wrong guy.”

Maitreya Badam, the assistant legal director at the Northern California Innocence Project (NCIP), stated, “Jennifer Thompson is a hero to many of us in her having transformed personal trauma and tragedy into a devotion to address the flaws of a system that severely impacted her own life. She has implemented positive change in many states. Her story is both harrowing and deeply inspiring.”

Jeff Rosen, DA of Santa Clara County, gave an overview of the mission of the District Attorney. “We must vigorously pursue justice, but to pursue justice in a way that is fair and treats everyone equally with respect. It’s to pursue justice justly. There are no shortcuts in doing that.”

In Santa Clara County, there is a unit within the District Attorney’s office called the Convictions and Integrity Unit. In this Unit, they look at both sides of every case, and in the last four years many individuals have been exonerated. “We called this a Convictions and Integrity Unit because the word ‘integrity’ has a sense of high ethics, high moral standards, and there is a strength and wholeness to it. What we’re trying to do at this DA’s office, and many DA offices, is to strengthen the convictions that we have obtained, meaning, to give the public even more confidence that their criminal justice system will convict the guilty and only the guilty.”

This unit was implemented for two reasons. Rosen explained, “Firstly, it looks backwards. We look at a case where a person was convicted, and if we don’t think that person committed the crime, we investigate those crimes appropriately. Sometimes that involves DNA work, sometimes it involves interviewing witnesses. Sometimes it doesn’t change the result, and there are times when it does. Often, a mistaken eyewitness identification was the root of that wrongful conviction.” Rosen continued, “Secondly, the Convictions and Integrity unit allows us to look forward. We are now looking at the best practices that will reduce the likelihood of wrongful conviction due to eyewitness identification. Eyewitness identification is a high risk area that does need improvement. Studies have shown that when you look back at wrongful convictions, there are over 300 DNA exonerations in the country, 70% of those cases that led to the wrongful conviction, was a wrongful identification eyewitness. About 70% of time the witness or victim picked out the suspect, 30% of the time they picked out a filler. If you were running a business that had a 30% error rate, you’d be out of business.”

"This discussion proves that there needs to be improvement in the criminal justice system. I have come to realize that a lot of the things that we were doing twenty to thirty years ago were not necessarily best practices,” said Gascon. “We have evolved and learned that people were not trying to be misleading, and it’s not even a matter of misconduct, but is simply because of how the brain works - how we gather and process information internally. We are human beings. When we’re dealing with people’s lives, and when we’re talking about incarcerating people, we have to implement checks and balances. We have to make sure that what we’re doing makes sense. And again, although people are trying to do the right thing, we have to understand that life-altering decisions are being made via a human being.”