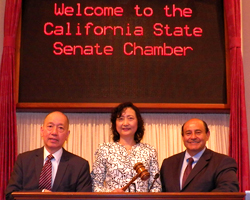 On March 4, 2014, USF School of Management professors Xiaohua Yang and Stanley Kwong were invited to speak at the California Senate Chamber on China-California trade and the reform of the Chinese financial system. This speaking opportunity was at the invitation of Lou Correa, CA State Senator and Chair of Banking and Financial Institutions, and Travis Allen, Assembly Member and Vice-Chair of Public Employees, Retirement and Social Security.

The United States has been the number one destination for Chinese foreign investment, reaching $14 billion in 2013. Largely due to its robust tech industry, California has attracted more than ¼ of this sum, more than any other state in the U.S. As California remains poised to be a highly influential hub for Chinese investment, Professors Yang and Kwong stressed the importance of maximizing the state’s success through increased coordination across government, business, and institutions for higher education.

Professor Kwong described the current state of trade between China and the United States, “China is translating its expanding wealth into global economic clout. Last year, China overtook the U.S. as the world’s largest trading nation and Chinese firms are increasingly morphing themselves from manufacturers and exporters into major global investors.” Kwong added, “The potential to expand the connection between California and China is limitless.”

In an effort to further promote the China-California trade relationship, Professor Yang founded the China Business Studies Initiative, which serves as an educational platform to assist Chinese enterprises in the U.S., and can provide valuable insights for companies looking to invest. Yang said, “Given the University of San Francisco’s prime location, our long historical connection to China, and our abundant resources, the China Business Studies Initiative can play a critical role in California’s success during this critical time of growth for Chinese investment in the United States.”