Leaders, experts, and students gathered to share their thoughts on global trade and blockchain technology.

Students, faculty, and others from the University of San Francisco community gathered to hear speakers and panelists talk about Blockchain technology and the changes happening between the US and China in terms of global trade this April. The crux of the issue was regarding Donald Trump’s sanction on increasing tariff for goods imported from China and if this will begin the brewing of a trade war.

The event was hosted by the China Business Studies Initiative (CBSI). Professor Xiaohua Yang, Director of CBSI and Kishan Bulusu, CBSI Advisory Board Member and Founder of Trealth, co-organized this forum.

The event opened with a speech given by Chinese Consul General to San Francisco Luo Linquan. He began by giving his warmest welcomes to the audience. “I am so delighted to see such a big audience... interested in global trade and investment through China,” said Linquan. He went on to provide context and informed the audience on the impact China has had in global trade.

Other notable speakers were USF Provost and Vice President of Academic Affairs Don Heller, Senior Director of Bay Area Council Economic Institute, Dr. Sean Randolph, as well as Director of CBSI Xiaohua Yang. “Trade has been historically shaped by policies and politics with significant shifts happening with new technology introduction,” said Yang. “Technologies like Blockchain are positioned to rapidly change traditional manual trade processes and open trade networks at a rapid pace.” The speakers discussed how Blockchain technology will impact modern trade wars, as well as guidance in navigating these changing times of global trade. Members of the CBSI Student Ambassador Program also had the opportunity to hold a panel discussion on their thoughts and research they found on a variety of companies. “Do you have any hunches on how the Trump tariffs may affect the companies you have researched on?” the students were asked. One student expressed uncertainty in the field of construction since the tariff greatly affects the import on steel. Until the final price of steel imported by China is determined, he explained, construction will resume, but until then, it is very up in the air. 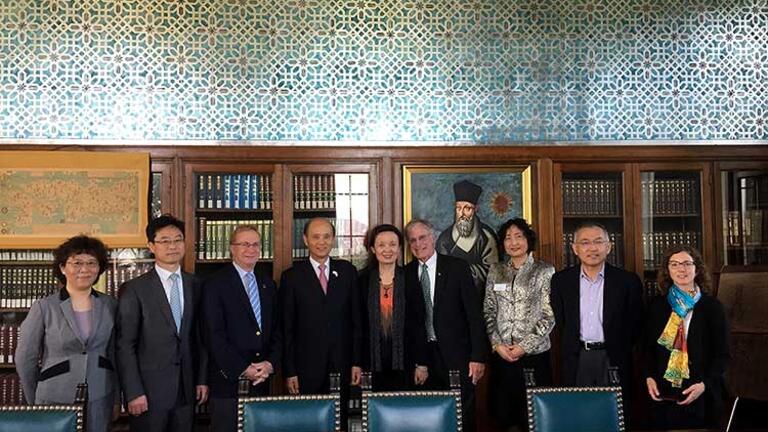