Techies Plan to Do Good and Change the World from Here

Contrary to what San Franciscans may think about techies, they are not just here to cause rent increases, but to make a positive impact. That was the goal of this past weekend’s 3rd Annual Tech for Good Startup Weekend in San Francisco, where 10 teams created 10 business ideas in a total of 54-hours.

The event was organized by a team of six graduate students from the University of San Francisco’s Master in Global Entrepreneurship Management (MGEM) program.

One of those students, Dora Liszkai, talked about how the team’s time in the yearlong MGEM program was the inspiration when choosing “Tech for Good” as the theme for the startup weekend.

We had our first semester in Barcelona, the second in Taiwan and the third back in San Francisco, so we got to travel around the world and we just got that inner drive to make a change and a real impact,” Liszkai said.

Liszkai and the team also found help from fellow USF students in planning the weekend.

“Some USF MBA students connected us with professionals and really made our job easy,” stated Liszkai, “People give so much money to non-profits and it is very hard to measure impact. We really want to make an impact in society through social enterprise. We wanted to provide an environment for people to be able to do that.”

Liszkai and her team weren’t the only MGEM students that took part of the weekend’s festivities. Dimag Ozgum and his teammates Yuki Asano and Mert Morali were awarded with an honorable mention from the judges after presenting their company, Soccer Buddy.

“We like to play soccer and every time we want to play at a park with our friends we always have problems. Some people decide not to show up to play the game and we want to solve this problem,” said Ozgum.

Their mobile app, Soccer Buddy, is aimed to help people create teams and organize games in real-time and connect with other who have a passion for soccer.

“They could not come in with any pre-existing work, no logos, no design work, no code, no business model, no nothing. It was just a pre-existing idea in somebody’s head.”

While each team had the same goal of winning the minds of the seven judges, only one team could win it all; a membership at Impact Hub, who hosted the event; consulting sessions with firm Schaffer & Combs and a scholarship to an entrepreneur program at Draper University.

Second runner up was team REACH, “Our mission is to connect people to social services through text messaging. The thing about texting is it’s actually free,” said Gregor Ruthven, who helped create REACH’s business plan.

Only one idea could win it all and that honor went to Team Bloober.

Jad Fayad, came up with the concept behind Bloober. Originally from Lebanon, he said it was difficult to watch his family struggle to find people who would donate the blood his grandpa needed for his treatments for Leukemia. This inspired others to join Fayad’s team.

“Imagine your father is dying and you have to go and ask people for blood. That shouldn’t be your job, you should be sitting next to the person who is sick and that really got to me,” Fayad said.

“It’s not necessarily that supply is the problem, it’s getting the right type of blood to where it needs to go,” Ribaudo said. “You're really making a difference and I think people need to know that.” 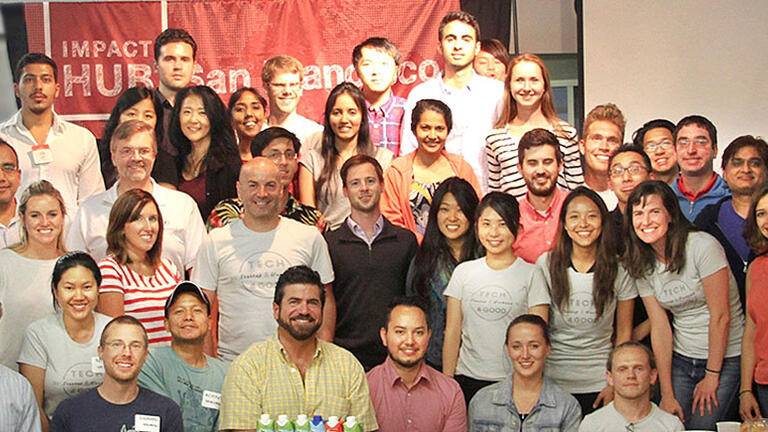