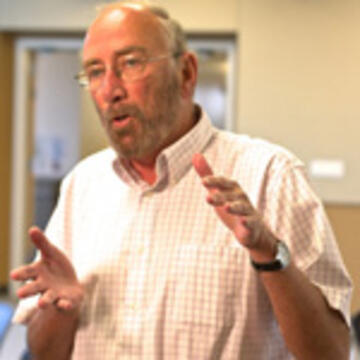 Dr. Arthur I. Karshmer was awarded the Fred Strache Award at the Annual International Technology & Persons with Disabilities Conference on February 26, 2013. The Strache Award acknowledges the leadership of the recipient in the field of disability and technology with an emphasis on continuing education, working with students as an educator and mentor, while remaining a leader in their respective field through publications, presentations and research. Dr. Karshmer has been hailed by the awarding body as someone who truly embodies these attributes.

Dr. Karshmer has spent his career researching how to help blind students and professionals master mathematics by using computer-based tools, which he develops with his research group. Two of his projects are the Math Genie, developed to help perform advanced blind mathematics, while the AutOMathic Blocks System is designed for very young blind students to learn the fundamentals of arithmetic through basic algebra.

Professor Karshmer says he was first inspired to work in the field of Assistive Technology by his first graduate student assistant, Richard Davis, who had lost his eyesight to a chemical accident at a very young age. Davis had to rely on a very crude device to help him with mathematics, a highly visual skill for most people. “Meeting Davis and working with him laid the foundations for my work and research with assistive technologies,” says Dr. Karshmer, “a fact I’m proud of.” Though this was over twenty years ago, Dr. Karshmer says he revisits his interaction with Richard Davis whenever he needs inspiration. “I believe in the work I do,” says Dr. Karshmer. “It might not be important to everybody, but it is to me.”

The greatest challenge in his field, Dr. Karshmer says, is getting people to believe in the necessity of the work he and his colleagues are doing. “These achievements, as you call them, are a mere drop in the bucket,” he says. “Progress is being made in vision-assisting devices, but they’re crude and expensive. We still have such a long way to go.” His hope for the future is to see his research pave the way for faster development and quicker progress in the field of assistive technology.  “I hope that my colleagues and I leave behind a firm foundation for the next generation of believers to stand on,” he says, “to build a world that’s accessible to everyone, regardless of their drawbacks or physical challenges.”

Congratulations, Dr. Karshmer, for the immense honor of this award.