Robert Ferguson MBA ’14 shares how a USF MBA helped him spot low-hanging fruit in the wine industry—and come up with a Proposal that wine lovers on both sides of the Pacific can’t refuse.

by School of Management MBA

For Robert Ferguson MBA ’14, the journey to starting his company Proposal Wine - which started popping corks stateside in January 2016 and has already sold 500 cases - began with an international business class at USF.

His entrepreneurial story shares many characteristics with the wines he is “obsessed” with marketing.

When Robert was a child, his father worked in international finance and would be assigned to a different country every four years. The family’s peripatetic lifestyle took him from Hong Kong to Singapore, Korea, the Philippines and Sydney, but it wasn’t until he arrived at the University of Colorado as an undergrad that Robert became a “Chinese history fanatic.” And so after graduating, he headed back across the Pacific for a year of intensive study in Mandarin at Peking University.

“I knew that China was going to be a serious player in my lifetime and for many lifetimes to come, and so to get myself set up for success, I moved to China to navigate my way.” Ultimately relocating to San Francisco with his wife, a Bay Area native, a few years later, Robert recognized that his new city has deep ties to Asian markets - which offered him a big opportunity, given his background, to help Chinese firms enter the U.S market and vice versa. But to do so, he needed a network.

In China, he’d built his network through a year in school, and Robert decided that attending business school in San Francisco would be the way to establish his network here. He heard over and over that USF “has very deep roots in the city of San Francisco.”

“I kept thinking ‘if this is going to be my home base, then I should build roots here, with the people who have roots here.’”

And so Robert enrolled in the Full-Time MBA program at USF, where “even out of my small group, there was diversity not only of global perspectives, but also of occupational perspectives, that I had not encountered before.“ Meanwhile, he was working with ChinaSF, which focuses on Chinese investment in San Francisco. While using his cross-cultural expertise and growing business savvy to help Chinese investors, he began noticing the high level of interest from the Chinese in the wine industry.

Robert learned that Chinese interest in and amount of money spent on wine was huge - and growing. And Chinese big spenders wanted what they perceived of as the best of the best. As such, the French quickly gained a lot of market share, followed by the Italians. Through his USF and ChinaSF networks, Robert learned that many U.S. wineries were busily trying to crack the nut of how to gain market share in China.

So, while he explains that “I never thought I’d be in the wine business - ever,” Robert realized there might be a big opportunity here to bring some of Napa’s high quality but lesser known wines to an eager Chinese market, hungry for value - and vino.

As a project for his School of Management international business class, Robert wrote up a business plan for a Napa winery looking to expand into the Chinese market. It was just a small step from there to teaming up with business partner John Longyear, whose wife’s family were longtime Napa winemakers, and deciding that they wanted to start his own wine label. Proposal Wine was born.

Helping him get his entrepreneurial venture off the ground was Robert’s USF professor and mentor John Durham. While taking Durham’s New Product Development class, Robert turned to him for advice and insights on Proposal Wine. In the process, Durham also recruited Robert to join his brand strategy firm, Catalyst S+F. Robert leapt at the “unbelievable opportunity to learn from him in marketing, brand positioning, and all aspects of business strategy when it comes to building a solid brand in such a saturated [wine] market.”

He started off exporting to Hong Kong in 2014 - but Robert quickly realized he wanted to turn his focus to building a strong brand stateside.  “The millennials of China are quick and savvy,” Robert explains. “They don’t want second rate stuff.” And if he could develop a brand with a good reputation here, that reputation would carry back to the Chinese market.

“The risk for me is - how do I make this succeed? In experimenting with ways to position ourselves, in advertising, every time I post an Instagram picture, I’m wondering - is it going to work? Is it going to capture who it is I really want us to be out there in the marketplace?”

According to Robert, the most fun thing about working in the wine industry - ”outside of having an endless supply of wine in my garage” - is that it’s an industry ripe for a marketing facelift. He argues that despite industry norms, a wine brand need not be pompous, and it’s his aim to present Proposal Wine as approachable. In clarifying his label’s brand, he asks, “How do I build that image of wine being consumed on the average day, when it’s not a special occasion? It can be a barbecue at home, or during episodes of The Bachelor."

Robert jokes about the stuffy traditional presentation of  wine, always depicted with a plate of grapes and cheese in a grandiose setting. With Proposal Wine, Robert takes a deliberately different approach. He aims to apply some of the innovative strategies he sees brands using in the Bay Area - including some of his Catalyst S+F clients - and take them 50 miles up the road to Napa.

“A lot of industries have learned, especially in retail and technology, that you’ve got to go to your client. Wine still has a pomposity to the way it talks about itself. Yet when I go to a wine store, I’m going to make a selection based on ‘Do I like that label? Do I know the grape? Do I know the regions? Is this a good price?”

He is quick to credit his experience with John Durham doing branding and marketing in the launch of his venture—proof of concept of the San Francisco network that his School of Management degree helped him to build. At USF, “there’s such a support network.”

Proposal Wine is currently being poured at eight Bay Area restaurants, including Causwell’s in San Francisco and Mill Valley’s Piazza D’Angelo. Interested in learning how a USF School of Management degree might be your ticket to entrepreneurial success? Learn more about our Full-Time MBA program. 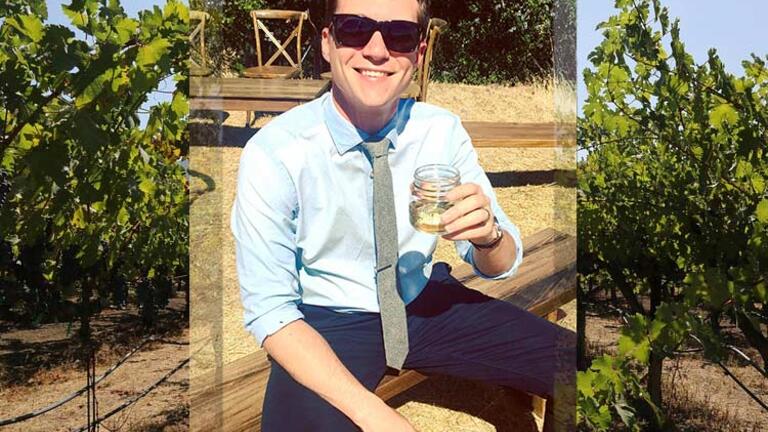