Bringing Seats to the Table 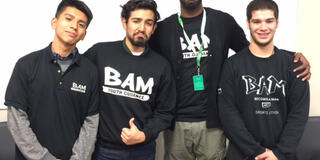 At age 23, Dylan Rose Schneider (MPA) ’15, along with a dozen other young activists, founded Peaceful Uprising, a grassroots climate justice organization. The young founders quickly saw the benefit in reaching out to and galvanizing a broader community of youths, and soon, young climate activists were creating art, getting active in the community, even becoming delegates in the Utah Democratic Party. Their voices were being heard—and they were eager to step up to the mic.

Fast forward to 2014, when USF School of Management Professor Rich Callahan brought a representative of the National Civic League to speak to Schneider’s “Strategy in the Public Sector” class about the drastically declining level of civic engagement in this country, especially in regard to youth. Motivated by their own experiences with effective youth engagement, Schneider and several of her classmates took on this statistic as a challenge.

“All of us came from varied backgrounds, and most of us were drawn to the project because we’d seen the power that could come from real genuine engagement—and we were also incredibly frustrated seeing the lack of that in the field,” says Schneider.

Changing the Narrative that “Youth Is a Problem”

With the support of both USF and the National Civic League, Schneider and her MPA classmate Shelly Helgeson ’15 began an expanded research project on the issue of community-based youth engagement, focusing on violence prevention organizations across the country. Their work “reflects their professional commitment, as well as that of the faculty in the MPA program, to applied projects, consulting with actual thought leaders to develop actionable recommendations for communities and organizations," explains Callahan. Their findings were published this fall in the National Civic Review, the longest running journal on local government.

Through their research, they found that the violence prevention organizations creating the most authentic opportunities for civic engagement embodied four core values—meaningful youth leadership, accessibility, collaboration, and active listening.

One of the organizations highlighted in Schneider and Helgeson’s research is the Chicago-based “Becoming A Man” (B.A.M.) program. “The work they are doing is absolutely game-changing,” says Schneider. “We’re seeing that the community-based organizations are not only starting to talk to youth as stakeholders, but they’re using innovative ways,” including sharing circles, emphasizing communication tools, and redefining what it means to “become a man.”

And their approach is working —young people in these community-based organizations come back as mentors, and a University of Chicago study found a 44% reduction in violent crime arrests for youth participating in B.A.M. “The organizations we ended up looking at were really changing this old narrative that we have that ‘youth is a problem.’ And they were switching that into terms of, ‘how can we get these youth excited and invested in changing what their community looks like and what their role in it is.’”

Schneider’s research gives her hope for the future—and an inclination for what path her career might take after she graduates with honors this December. In her National Civic Journal article, she considered ways that youth can be empowered as community stakeholders—as well as ways that they have been systematically excluded. Now, she’s applying this perspective in two fellowships she is currently completing—with RSF Social Finance and with International Development Exchange (IDEX). “I’m really interested in taking the same lens and looking at the people being impacted in social ventures and who’s sitting at the table to make funding decisions.”