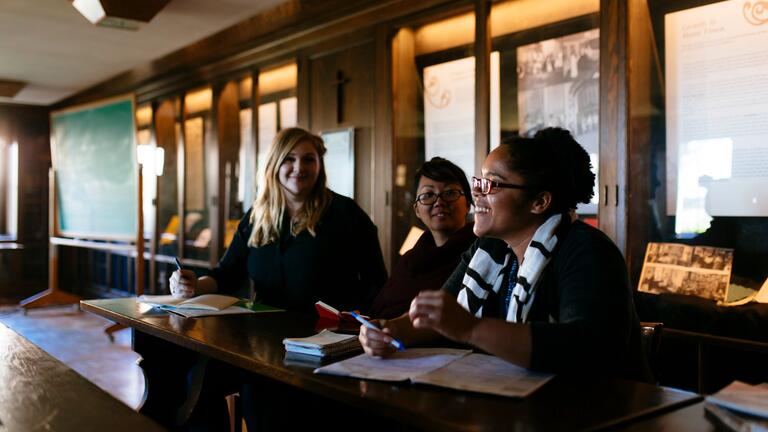 Each semester a different group of selected students called Davies Scholars participates in the interdisciplinary Davies Seminar under the direction of that semester's Davies Professor.

Always retaining the theme of 'the Search for Values in Contemporary America', the Davies seminars have covered a wide variety of topics, ranging from Josh Gamson and Peter Novak's Crossing Gender in America: Politics, Performance, and Identity to Megan Nicely and Liat Berdugo's The Quantified Self: Technology, Choreography, and Embodiment and Evelyn Rodriguez and Melissa Ann Canlas' A People's Guide to the Age of Trumpism.

To complement the seminar, Davies Professors have brought to campus a great number of exciting speakers, including political leaders like McGeorge Bundy and Ralph Nader, novelists like Isabel Allende and Arundhati Roy, academics like Sissela Bok and Douglas Hofstader, spiritual leaders like Archbishop Desmond Tutu and Rev. Jesse Jackson, and other leading public figures, including Dusty Baker, Betty Friedan, and Pierre Salinger.

The Davies Forum was established by Mrs. Louise M. Davies of San Francisco to enhance the University's efforts to produce future leaders dedicated to public service and committed to ethical leadership. The continuing theme of the Forum, "The Search for Values in Contemporary America," provides an opportunity for all participants to examine anew, and from different points of view, the turbulent state of American society in the last half of the 20th century and into the 21st century.