Students in Professor Christina Garcia Lopez's “Narratives of the U.S.” class were recently graced with a talk from visiting lecturer Professor Enrique Lima from UC Berkeley, an expert in Native American studies. The talk posited the idea that Native writers, even if well-meaning, can fall into the same subversive trap that non-Native writers do when depicting other Indigenous peoples.

“Beginning with Columbus and continuing to present-day popular culture,” Lima said, “the image or the ‘idea of the Indian’ has retained a powerful hold on the imagination of non-Native people. Indigenous writers throughout the Americas have challenged those depictions, catalogued their destructive and dehumanizing effects, and demanded the right to represent their own realities.”

But can Native writers also be seduced by the ‘idea of the Indian’? What problems emerge when Native writers fictionalize abstract ‘Indians,’ even when they do so in the service of Indigenous resistance?

Lima’s talk considered these and related questions in terms of the literary works of D’Arcy McNickle, Leslie Marmon Silko, and Louise Erdrich — three major Native American novelists — and afterward, students were given space to ask questions and discuss the ideas Lima presented, not only amongst themselves and with their professor, but with Lima himself.

“Narratives of the U.S.” is a core course in literary, artistic, and creative inquiry and production that focuses specifically on critical diversity in the arts and humanities. Comparative and interdisciplinary, it focuses on texts and/or performances around diversity and social justice issues. And Lima’s talk, and subsequent availability for discussion, was designed to give greater and supporting context to term papers the students were putting together.

Garcia Lopez is an Assistant Professor with the English Department, but teaches in the Critical Diversity Studies program and is Director of the Chican@-Latin@ Studies program.

The event was sponsored by the Center for Latina/o Studies in the Americas (CELASA). 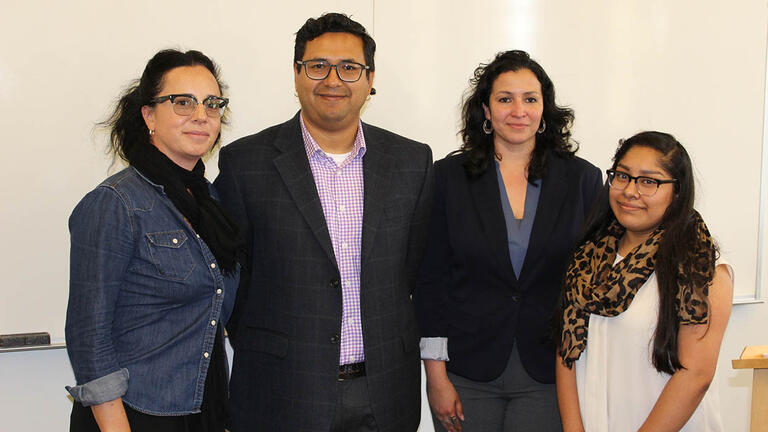