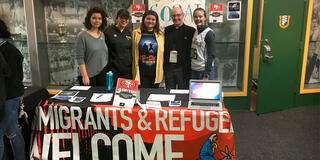 The new undergraduate organization SORAI — Student Outreach for Refugees, Asylees, and Immigrants — is giving students a chance to carry out the University’s commitment to social justice. Since its inception in 2016, the group has been planning events to help educate staff, faculty, and students about the challenges refugees and immigrants face and how to help them.

The organization’s most prominent event to date was a talk by Father Florenzo Rigoni, a leading international humanitarian for migrants and refugees from around the world. Father Rigoni has devoted 45 years of service to human mobility, working with migrants in Germany, Mozambique, South Africa, Angola, the Congo, and Mexico.

“Through his words, I understood that national identity is as arbitrary as the creation of our state lines. There is no reason to respond with hate and fear to people who are fleeing their homes. I came away with the idea that people need to think beyond borders and promote human connectivity.”

“Father Rigoni pointed out that no matter how tall or big of a wall is built on the US-Mexico border, migrants will find ways to get over or around it. Migrants are desperately fleeing violence and poverty, and a wall will not stop or deter their goals of reaching safety.”

Support for Refugees, Asylees, and Immigrants

California is home to millions of immigrants and refugees, with many living in the Bay Area. At USF alone, numerous faculty, staff, and students are immigrants from around the world, including the Muslim-majority nations affected by the Trump administration’s policies on immigration. USF has taken a firm stance against the original and revised executive order, extending support and resources to immigrants and undocumented students.

Leah Welsch ’18, SORAI’s current president, said the organization strives to mirror the University’s efforts. In addition to the event with Father Rigoni, SORAI held two fundraisers this year to benefit the Jesuit Refugee Service. Several members received training to provide volunteer legal support during raids by U.S. Immigration and Customs Enforcement (ICE). In April, the organization is planning a trip to 1951 Coffee in Berkeley, which offers training and employment for refugees and asylees.

SORAI counts many students in the International Studies and Politics programs among its members, including President Leah Welsch. Leah said the organization complements what she’s learning in her Politics courses about social justice. Isabel Duarte likewise sees a connection between SORAI and International Studies’ focus on human rights and the global community. But SORAI is open to undergraduate and graduate students of all majors; the only requirement is a passion for improving the lives of refugees, asylees, and immigrants.