Banking on the Humanities

Politics and philosophy major pursues a career in venture capital

Ryan Eppley ’16, who recently completed internships at the Small Business Administration (SBA) and investment firm Merrill Lynch, didn't major in business. Surprised? That might be because people often underestimate the value of a humanities degree — or two, says the politics and philosophy double major.

“For the world I’m planning on entering, startups and venture capital, success depends on the analytical skills a humanities education offers,” Eppley says.

He points to his penchant for deep analysis, gift for critical thinking, and ability to solve problems on the fly, as well as his tendency to come at issues from unexplored angles — skills he’s honed at USF.

As an innovation specialist at the SBA headquarters in Washington, D.C. this past summer (part of the USF in D.C. program), Eppley guided entrepreneurs on how to start and grow their businesses.

“One week, I met with Matt, a deaf entrepreneur, who pitched me his home safety device idea for deaf people living at home,” Eppley says. “I provided him with advice on how to penetrate the market, improve his income margins, and run industry research comparisons.”

Learning such industry-specific knowledge was a huge benefit of the hands-on experience at SBA, Eppley says.

This winter break, Eppley interned at Merrill Lynch in Philadelphia, near his hometown. He analyzed options for rebalancing investment portfolios to protect the firm’s clients and compared competing companies’ strengths and weaknesses within their industry to identify investment opportunities.

Philosophy Professor Ronald Sundstrom, who taught Eppley, isn’t surprised at his success. “In today’s society, with so much information and so much complexity, what’s needed are context, historical knowledge, and the know-how to critically synthesize and reach a reasonable conclusion,” says Sundstrom. “And that’s what a humanities degree offers, rather than a narrow specialty.”

One of the academic opportunities that drew Eppley to USF was the chance to join St. Ignatius Institute, USF’s rigorous great books program, which offers a track to study abroad at Oxford University for a semester.

“It’s was a dream of mine to study there,” says Eppley, who, along with everything else, played midfield on the Men’s Soccer team his freshman and sophomore years before going abroad. “The Oxford model is unique. I attended one-on-one tutorials with my professors each week. Each tutorial required a 12-page paper per week, making the workload very rigorous. It was one of the most challenging experiences of my life but also one of the most rewarding.”

After graduation, Eppley sees himself entering into the world of venture capital where he wants to grow and build young companies to the million dollars a year revenue stage.

“I see myself working on the frontlines of ingenuity,” Eppley says. ”USF helped me develop a skill set and expertise centered around rethinking the world and bringing an idea to fruition. That’s the role I’m looking for. At the core of that is the idea that I can contribute to making the world a better place, a value at the center of a USF’s mission.” 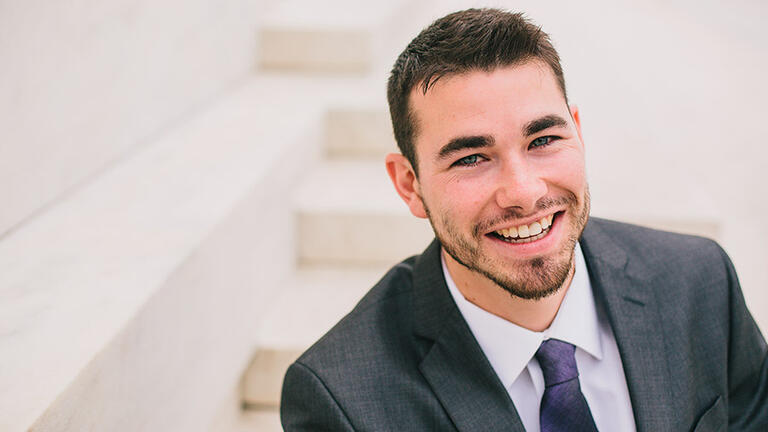