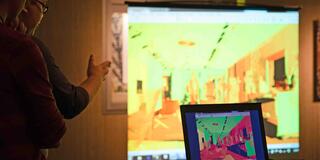 Undergraduate students in the Architecture and Community Design (ARCD) program at USF are stepping outside of the classroom with state of the art technology to scan and image current real engineering projects in the area. 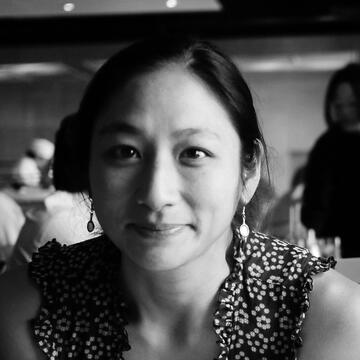 One of these projects was Mission Santa Cruz, a Spanish mission founded by the Franciscan order in present-day Santa Cruz, California in 1791. Professor Hana Mori Böttger and students in her ARCD 372: Engineering, Design and Testing course traveled to the mission, scanned its buildings and area, and brought the data back to the campus labs. It only took a Saturday.

The platform, a Leica C10 ScanStation, is essentially a laser on a tripod. The laser light passes through a spinning mirror while the machine rotates on the tripod. As the laser light contacts the first physical surface, it reflects back to the instrument.

“Using the known speed of light, it can calculate exactly how far away that surface must have been,” Böttger explained in an interview. “That location is recorded as a point in space. Between the spinning of the mirror and rotating head of the unit, the laser sweeps almost a complete sphere in all directions, recording the surrounding surfaces as a cloud of points. This results in a Point Cloud File, a collection of dots representing the physical space around the location of the scanner, including all objects from buildings to people within approximately 200 yards.”

After each scan, the scanner can be moved and the process repeated until all desired angles are captured. These individual scans are then stitched together in a registration process in order to create one giant point cloud of all the data, she said.

“Scanners in general are the fastest way to make extremely accurate records of physical spaces and objects,” Böttger said. “They range from large-scale—like ours—which can lead to an exact topographical map of a landscape or 3D model of a structure, to ones that can be hand-held and very nimble, more oriented toward scanning small objects like artwork and even intricate jewelry.”

The two greatest benefits, Böttger continued, are the fact that, first, no measuring device, such as a tape measure, needs to be physically applied to the surface, thereby endangering objects which are fragile or eroding; and second, it is many times faster than attempting to measure and document something to that degree of accuracy by hand. 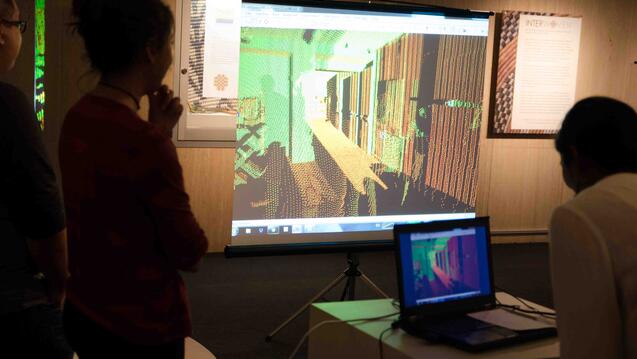 “The Point Cloud File you get from doing this can be used to study the exact physical nature of the object or space (slicing through it like an exterior CAT scan). Or it can be used as a base ‘drawing’ in order to design additions, retrofits, or other changes to a structure. Or it can be used to make a video game, or educational material, or simply as a record, a historic document,” she said.

Böttger and the ARCD program plan, in the near future, to offer a class specifically concerning the use of the scanner and all of its capabilities. This would require, however, a scanner expert from CyArk, the organization from which the ARCD program’s machine was purchased, to teach the class.

Meanwhile, the scanner is being used primarily for Böttger’s own research: scanning and constructing high-accuracy structural records of California missions. That said, with her limited training, Böttger has been able to incorporate it into her ARCD 372: Engineering, Design and Testing course, which is a sort of engineering design studio course. Here ARCD undergraduates have the chance to get hands-on (albeit closely supervised) experience using the scanner, as they did in their visit to Mission Santa Cruz. 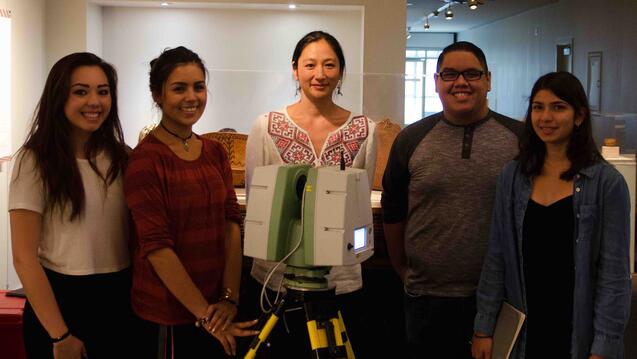 “Mission San Miguel is next,” Böttger said. “I'll be going with three students over Fall Break. We will do an exhaustive scan of all the buildings and especially the Sacristy of the church, which has been retrofitted recently to perform better in earthquakes. My students and I will create line drawings of the state of the buildings and interpret their structural condition with the help of the original structural engineer who worked on the retrofit”

She and her students will be going back twice a year, once in rainy season and once in dry season, to record the effects of expanding and contracting on the retrofit.

“The part that always gives me pause is the fact that this incredibly high-tech method really seems to be the most appropriate way to handle and record the most ancient or delicate objects,” Böttger said. “Also, the work with the Missions is poignant because, as a Jesuit Catholic institution, it only makes sense that we should contribute to the preservation of California's Native and Catholic history.”