The 22nd annual symposium hosted by the USF School of Management provided opportunities in discussing the use of force in policing, accountability, and USF’s core-value of social justice. 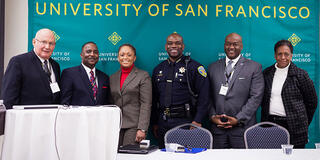 USF kicked off the New Year with what it does best — educate the community.

The 22nd Law Enforcement Leadership Symposium was held from January 5-6 and explored issues on relevant topics in law enforcement reform such as accountability in policing and the use of force.

Retired SFPD Police Chief and current School of Management assistant professor Anthony Ribera served as the event leader and explained the focus of the symposium to be “ethical leadership in law enforcement.” Many highly ranked law enforcement officials from California attended the event as guests as well as panelists and speakers to address colleagues and the community. According to Ribera, 295 attendees from California were registered for the event, and most were “command level;” there were also fifteen chiefs and four sheriffs in attendance.

USF President Paul J. Fitzgerald, S.J. and School of Management Dean Elizabeth Davis shared welcoming words to the attendees in an inclusive introduction that emphasized unity between the community and law enforcement agencies.

One of the best parts of a USF education is learning to become a community of inclusive excellence. ...Our Law Enforcement agencies are and should be a great force for inclusivity, equity, and people feeling safe.”

Fr. Fitzgerald personally thanked the listeners “for all of the great work that you do,” and he encouraged them “to lean on each other, to find again that really deep wellspring of joy that motivates you in your profession.”

Dean Davis expressed how impressed she was by the guests who attended the event.

We’re very well aware that you’re probably one of the most closely scrutinized arms of the government in society, and not always fairly reviewed. So this symposium is really an opportunity to look both at its successes and the failures, and most importantly, developing new strategies towards serving the community.”

The conference also focused on important subjects such as community trust, professionalism, discipline, and transparency. Numerous important figures in law enforcement throughout California addressed the audience in their panels and presentations. To name a few were:

“What we try to do is get diverse ideas on the topic,” explained Ribera. He spoke highly of the panelists, speakers, and moderators at the event. McAllister’s panel is one Ribera deemed as “one of the better panels we ever had.” He explained it comprised of five chiefs “who discussed the challenges they faced” in regards to “the importance of their credibility to the officers that work for them and also getting the credibility of the community they serve.”

When asked what the significance of holding the event at USF is, Ribera responded: “to have meaningful discussion of social justice in our society, we need to include law enforcement.” He explained that the first symposium Ribera held was when he was still the police chief at SFPD — and how the SFPD “[has] been our cosponsors for the last 22 years.”

This past June, Ribera coordinated a panel on the use of force in policing at the Social Equity Leadership Conference which USF hosted — presenting the persistent effort and passion USF has on creating discussion surrounding topics of social justice, politics, and the unification of the community. The main takeaway from the 22nd symposium, Ribera said, is: