Shelley Alingas MA ’17 is changing the world from here as an advocate for women in the sports industry. Leveraging the vast network of the Sport Management program, Alingas is an active participant in Bay Area groups that support females who work in and play sports. Most recently, she emceed the inaugural Women Sports Film Festival in Oakland, Calif. Read her first-person account of the experience below.

I could have never imagined that I’d be on stage at the Women Sports Film Festival, the world’s first film festival dedicated to celebrating female athletes and their storytellers. One year ago, I was still at my old marketing job only daydreaming about a new career in sports.

Becoming a USF Sport Management student turned that daydream into a reality, and the program has since connected me with a community of professionals who are also passionate about fostering more opportunities for women in the industry. One of those professionals is Susan Sullivan, the Bay Area documentary filmmaker who organized the festival after watching “Light Fly, Fly High,” a documentary about a young Indian woman named Thulasi who refused to let poverty, fear of sexual exploitation, or pressure to marry stop her from boxing her way to a more meaningful life.

Because of my connection with Susan, I had the opportunity to emcee the festival. On stage as the festival's host, I facilitated a conversation between the audience and the documentary’s filmmaker Susann Østigaard, who was motivated to make the film after Thulasi's first words to her: In India, girls are expected to ride on the back of their father's, husband's or brother's bike. She wanted her own motorcycle so she could show Indian fathers what their daughters are capable of.

Since the film wrapped, Østigaard told us that Thulasi has been competing nationally in motorbike racing. We erupted in cheers.

The festival, held from July 28-30, 2016 in Oakland, Calif., opened just a week before the 2016 Summer Olympics and on the same night Hillary Clinton made history as the first female Democratic presidential nominee.

That night, I watched festival executive producer and USF alumna Jennifer Matt MBA ’05 take photos in the sold-out theater for the screening of “T-Rex: Her Fight for Gold,” a film about Claressa Shields (a.k.a. T-Rex), the first female Olympic gold medalist in boxing.

Young girls, local community partners, historians, sports buffs — all in one room breathing life into what was once a dream.

The connections I’m making in the Sport Management program came together like pieces of a puzzle working to uncover these stories of women in sports so they don’t become lost in the male-dominated media. Uncovering these stories means a better future not just for women, but for sports as well. My hope is that the festival inspired others, like alumna Ruizhi Lin, MA ’15 — a talented filmmaker herself — to continue building toward that better future.

“After the ‘T-Rex’ film, young girls from the East Oakland Boxing Association came on stage to share their passion for boxing. That moment made me realize that there is more than one Claressa Shields. Those girls are all around us and they deserve our support and attention,” Lin said. 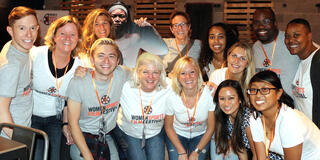