Shouting Good News Over the Hilltop 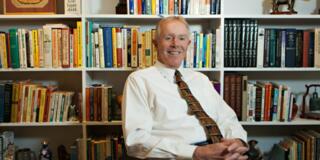 As a three-time USF graduate with a 64-year history with the university, Hal Urban ’62, MA ’66, EdD ’78 is one of the many USF alumni who have carried the university’s values of change and giving long after graduating.

After earning degrees in history and education, Urban moved to Redwood City and began his 36-year teaching career. During that time, he taught at two high schools and commuted to USF as an adjunct professor, which allowed him to teach students of varying ages.

Since retiring from teaching, Urban has written eight books and given thousands of speeches both within the U.S. and internationally. He gained success through his lessons on personal growth and character development, all of which were inspired by events throughout his own life.

His experiences as a teacher inspired his most recent book, The Power of Good News: How to Feed Your Mind With What’s Good for Your Heart.

As a former USF basketball player, Urban intends to allot a portion of this book’s profits to the USF men’s basketball team and to other divisions within the university that need support. Members of the USF community can find the book on Urban’s website.

For Urban, there’s no hesitation when it comes to giving back to the university. USF became his home all those years ago and he has proudly supported green and gold ever since.

With gifts like Urban’s, the university will be able to provide more assistance to students during these rapidly changing and unexpected times.

Over the past year, it seemed more apparent than ever that unpredictable times came with a lot of bad news. Urban’s book engages readers in the idea of what it means to actively seek out the good.

It’s a life motto he’s carried with him for quite a while.

Aiming for a New Perspective

At the beginning of certain social studies classes, he would ask his students to talk about current events and what they saw in the news. But the effects on the discussions were gloomy, according to Urban.

He remembers a particular day when a student asked him, “Why is the news always so bad? There’s never any good news.” That’s when Urban decided to change the students’ perspectives.

“I said, ‘Okay, let’s make it easier then. Do you have any good news to share? Do you have anything good going on in your personal life? In your family? In school? In the community? Tell me something good that’s been happening.’”

The idea was such a success that he integrated it into all of his courses, both for high schoolers and adults. His students poured out good news at the start of each class and it lifted everyone’s spirits, especially Urban’s.

“We shared happy things in our lives and that’s been with me ever since,” he said.

Urban had hoped to write a book about good news for several years, but he had an obligation to deliver four books about character development to his original publisher. Numerous publishers told him, “Good news doesn’t sell.” But now, after finding a publisher who believes it will sell, he believes his book will help people look for — and find — more good in their lives.

How USF Changed His World

Throughout the years, Urban has fondly remembered the experiences that USF gave him, and he dedicated his life to paying it forward. “My parents weren’t wealthy, but they were generous. I always wanted to be generous myself, especially with USF,” he said.

Over the years, Urban has donated annually to USF as a President’s Ambassador. Urban has also included a generous gift to USF in his estate plan and is a member of the Fr. John Lo Schiavo Legacy Society.

Urban believes giving back is the most important part of what it means to be a Don.

“I have this quote on my desk that says, ‘We do ourselves the most good doing something for others,’” Urban said. “That’s really why we’re here. It makes life a lot more rewarding.”

To Join Urban in giving back to USF, consider making a gift in support of Changing the World From Here: Campaign for the University of San Francisco.