From Habitat for Humanity to Golden State Warriors

With the start of the 2019-20 NBA season, the Bay Area’s very own six-time championship Golden State Warriors will move from the Oracle Arena in Oakland to a new home in the Mission Bay neighborhood of San Francisco. Construction on the new Chase Center began during the 2016-17 season, with USF Architecture and Community Design graduate Mark Kilroy ‘08 off the bench.

What began as an infatuation with San Francisco has become an active role in shaping it. Mark currently works for the Mortenson | Clark Joint Venture as a Project Scheduler on the Chase Center project, playing a game-changing position in shaping the San Francisco landscape and sport’s history.

Since coming to USF, you’ve actually had a hand in shaping the Bay Area.

It gives me a sense of community and roots. The concept of ‘home’ has been tricky for me since I was born in the Philippines, a place I have never returned, and I was raised in Boston, where I struggled with my identify as an adopted child trying to fit in and where I haven’t lived in over 14 years. I see my history mapped out everywhere I look from the first house I framed in East Oakland to the first skyscraper that I scheduled on Fremont Street.

Tell me about the work you’re doing on the Chase Center project.

The Chase Center is a not only the future home of the Warriors, but also includes two 11 story office towers that will be part of the Uber Campus, a below grade parking garage, and a public plaza featuring a several shops and restaurants reaching out to the Bay. I’m part of the scheduling team which is responsible for developing the project schedule, updating the schedule to reflect field progress, and evaluating completion variance to project milestones. I am specifically tasked to tracking the status of material procurement and build out of the interior finish spaces in the arena.

What does the project mean to you and the sports community?

I went to my first Warrior’s game in 2010. There was something really special about being at Oracle Arena, the way the cheers from the fans reverberate through the arena, that got me hooked. I bought a Monta Ellis jersey that night which I still wear today so I’m not mistaken for a bandwagon fan. Our project team hosted a Christmas Lunch on the bowl floor of Chase Center this past year to thank all of our field workers for their dedication and hard work, and during that event we all took part in the first WARRIORS! chant in the arena. The people who work on this project bring a little extra with them every day because of what this project means to them, their families, and the city of San Francisco, and that's reflected in how much work we put in place every day and our stellar safety record on the project.

Can you talk about some of the field work you did at USF to prepare you for your career?

During the spring semester of my sophomore year, one of our projects in studio was to assist with the design of a small library for an orphanage in Zambia. We helped draft plans and built scale models of the building, while coordinating with the project architect to complete the design. The following summer, six of us flew to Lusaka with Professor Seth Wachtel and spent a month and a half assisting with excavation, foundations, and construction of the library. Most architecture programs don’t provide for much field experience, but Professor Wachtel has done an excellent job of developing design/build opportunities, both locally and abroad.

I also interned with Okamoto Saijo Architecture in San Francisco during my senior year. I had taken a Computer Aided Design course during my sophomore year which served me well, as my primary role at OSA was to prepare presentation drawings for project pursuits.

How do you see your work continuing USF’s mission?

After graduating from USF, I served two years in an Americorp position with Habitat for Humanity, building affordable homes throughout the East Bay. While I was giving back to my community through teaching volunteers and future homeowners how to build, I also launched my career in the construction industry. Every couple of months, you can still find me at a Habitat site, where I feel the most happiness, the most freedom, and the most alive helping others work towards a better life. 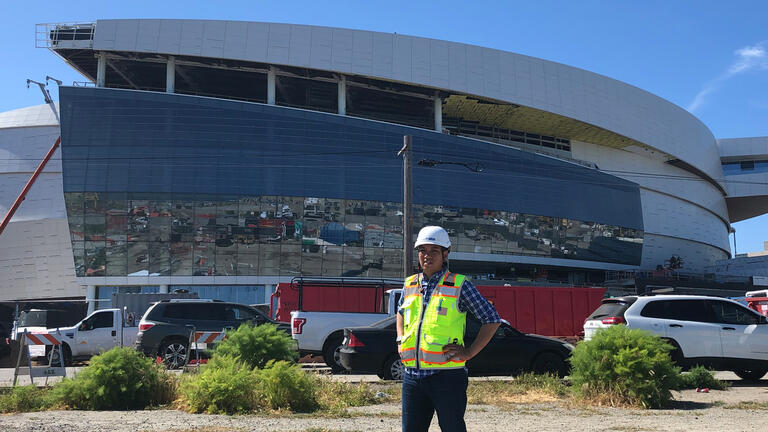