Stopping the Next Pandemic 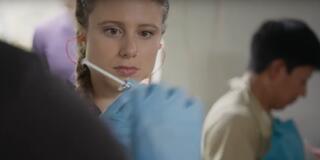 As the world rushes to tackle coronavirus, now classified as a global health emergency by the World Health Organization, a new Netflix documentary series spotlights the potential consequences of a fast-moving outbreak.

Pandemic focuses not on coronavirus but on a more common and potentially more dangerous disease: influenza. The last catastrophic flu outbreak killed some 50 to 100 million people in 1918. The next influenza pandemic, experts say, could strike at any moment and be far more devastating.

At the heart of the documentary series is a group of Bay Area scientists — including several USF alumni — who are working on a universal vaccination that could quell even the most fatal strains of the flu.

Preventing the Next Big One

Sarah Ives PSM ’15 is the lead scientist working on the vaccine at Distributed Bio in South San Francisco and is featured prominently in the series.

Distributed Bio has created a computational model that predicts why the human immune system fails against rapidly mutating viruses like the flu. A vaccine based on that model has proven successful in initial tests and earned the support of the Bill and Melinda Gates Foundation, which recently granted $2 million for continued studies with the potential for an additional $10 million to follow.

The flu this season alone has killed between 12,000 and 30,000 people in the U.S, according to the U.S. Centers for Disease Control and Prevention.

“I want to be involved in making a vaccine that will prevent the next pandemic,” said Ives, who enrolled in USF’s professional science master’s program in biotechnology after undergraduate work in Wisconsin. “Working on this vaccine means I’m one step closer to achieving that.”

Distributed Bio’s co-founder and CEO, Jake Glanville, who serves on the advisory board of the USF biotech master’s program, mentored Ives in a computational biology internship in the fall semester of her second year. The pair kept in touch, and he later hired her full-time.

“Having the PSM degree from USF was critical in me building my resume to find jobs in the industry in the Bay Area,” said Ives. The biotech field is extremely competitive, she said, and the PSM program encourages industry-focused internships. By getting an internship at Distributed Bio, “I began growing my biotech network quickly to meet key people and learn the relevant technologies, getting my foot in the door early on.”

Christina Pettus PSM ’17, another USF graduate who appears in Pandemic, started as an intern at Distributed Bio, where she worked with Ives on the flu vaccine study.

“I learned so much in my internship,” said Pettus, who now works full-time at the company. “Distributed Bio is a startup, so you have to be independent and learn on the fly. It makes you a stronger person and a stronger scientist.”