by By Mary McInerney, USF News 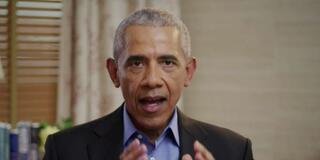 In an awards ceremony on Aug. 6, former President Barack Obama recognized the lifetime of civil rights work accomplished by Clarence B. Jones, co-founder of USF's Institute for Nonviolence and Social Justice.

“If there’s one thing his story teaches us, it is that we cannot rest,” Obama said. “This past year has reminded us just how far we have to go.”

The American Bar Association honored Jones with the 2021 Thurgood Marshall Award in an online celebration.

“Like Dr. Jones, let’s do our part to leave the world more equal and more just,” Obama said.

Jones interned as a college student for Thurgood Marshall at the NAACP in 1957, before Marshall became a U.S. Supreme Court justice.

“Thurgood Marshall took no prisoners and Clarence Jones learned from Thurgood Marshall — you take no prisoners,” said Jones, explaining how he learned to be tireless in pursuit of civil rights. He dedicated the award to his parents, who worked as household servants, and he expressed gratitude for the Black Lives Matter movement.

The Thurgood Marshall Award, established in 1992, honors its namesake, who was committed to civil rights in this country. The award recognizes long-term contributions by members of the legal profession to the advancement of civil rights, civil liberties, and human rights in the United States.

Jones was a friend, adviser, and lawyer to Martin Luther King Jr. from 1960 to 1968, the year King was assassinated. Jones played a pivotal role in many events in the Civil Rights era, including assisting in the drafting of the “I Have a Dream” address that King gave at the March on Washington on Aug. 28, 1963.

Jones served as part of King’s inner circle of advisers, along with former Atlanta mayor and UN ambassador Andrew Young and political activist Jesse Jackson. Jones and Young came together in February for a USF discussion on today’s civil and social unrest. Jackson spoke at the university in 2017.

Jones, a visiting professor at USF, co-founded the Institute for Nonviolence and Social Justice at USF in 2018 and announced his retirement this year.

Jonathan Greenberg, co-founder of the Institute for Nonviolence and Social Justice, spoke at the awards ceremony honoring Jones.

“Today, Dr. Jones is the only surviving member of the planning committee for the August 1963 March on Washington for jobs and freedom,” Greenberg said.

Many others spoke during the ceremony of Jones’ commitment to civil rights, including Lateefah Simon MPA ’22, president of the Akonadi Foundation, who talked about Jones’ influence on younger generations of racial justice activists. 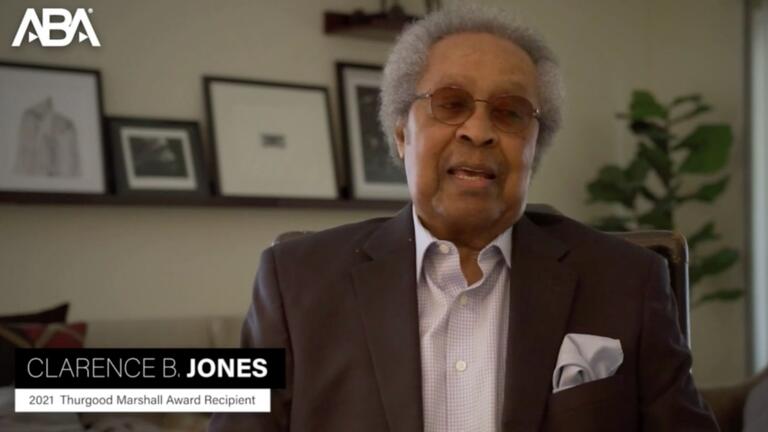 Clarence Jones dedicated the award to his parents, who worked as household servants.