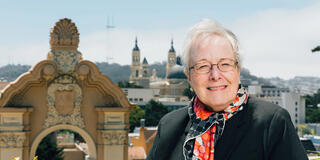 Dr. Patricia Pearce, new interim dean of the School of Nursing and Health Professions, brings 26 years of experience to the university.

Pearce was named interim SONHP dean July 1 as the university launches a search for a replacement for Margaret Baker, the dean of SONHP since 2016, who has retired.

Most recently, Pearce was nursing and health chair at Clarke University in Iowa. Before that, she was coordinator of the doctor of nursing practice program at Loyola University New Orleans. She was also a director in the school of nursing at Loyola, as well as interim dean of the College of Graduate and Professional Studies, which became the College of Nursing and Health while she was there in 2019.

Pearce said she looks forward to working in a place with a strong Jesuit mission that supports diversity and community engagement. The pandemic, too, is front of mind for her.

“Nursing and health professions graduates are critically important during our current times of crises,” she said.

Pearce has taught in the classroom in addition to serving in university leadership, and she has authored or co-authored 43 publications, including a paper about microfinance-based interventions for health outcomes in underserved people and a study about student engagement in online nursing courses.

She holds a BS in nursing and a BA in history from Loyola University New Orleans, an MPH from Tulane University School of Public Health and Tropical Medicine, and an MS in nursing from Mississippi University for Women. She earned a PhD in nursing at the University of North Carolina, Chapel Hill.

In addition, Pearce holds leadership roles in national health care organizations, including as a fellow in the American Association of Nurse Practitioners and a fellow and distinguished scholar in the National Academies of Practice.