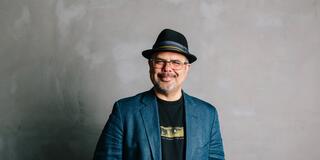 The film, literature, and urban studies professor talks about visual arts and "wandering in idleness."

What do you teach at USF?
I am a scholar and a visual artist. As a scholar I concentrate on Latin American and comparative literature. My home program is the Department of Language, Literatures, and Cultures but I also teach in the film studies minor, and I have taught in the urban studies program. Recently my work has veered toward visual arts, particularly photography.

You focus on both literature and the visual arts?
In my native Venezuela and in Canada, where I did my undergraduate work, the opportunity to “wander in idleness” was very formative. This meandering led me from one thing to another. For instance, a novel would make me curious about a film based on that novel and then I would get excited about film in general.

Why visual arts?
It began with an academic interest in cinema. I co-developed the film minor, and I then used a sabbatical to learn to make films. I have written and directed a few films and made documentaries and video pieces for art installations. I am fascinated by the photographic aspect of cinema and have begun exploring photography in earnest, almost obsessively.

What inspired you to create Duerma en ti, your photography exhibit currently on tour in Spain?
Over a 40-year period in Spain, the so-called “lost children of Francoism” were abducted from their mothers, right after birth, from hospitals and maternity wards. They were sold to families that espoused the values of Franco’s dictatorship. A friend was working with grassroots groups looking for stolen relatives and I began taking photos of the victims — mostly mothers, but also some brothers and sisters. My first pictures were documentary in nature but the victims needed a more powerful aesthetic treatment to depict their situation. I was inspired by 16th and 17th century Baroque portraiture, especially the expressiveness of subjects’ gazes. It is exciting and humbling to do artistic work of relevance in a country finally reckoning with its dark past.

What’s something that surprises people about urban studies? Or minoring in film?
In urban studies, it’s that a city is like a living organism and that space is not a given, but socially produced. In the film minor, students are surprised to learn they can make their own films here.

How do you spend free time?
Playing Bach on the piano, which is my version of meditation. I also walk the city with a camera in hand.

What was your first job as a teenager?
Piano teacher.

What’s your favorite app on your phone?
The light meter app, which I use for analog photography.

Why USF?
USF allowed me to continue wandering. It has encouraged me to follow my curiosity and explore how disciplines and ideas cross pollinate. It is a wonderful playground for the ethical exploration of ideas and learning.

Any advice to incoming students?
Learn a second language. Read outside your discipline — you might shed new light on your discipline. Read literature — you see the world from someone else’s perspective. Explore the city — get excited about the history of the place. Do a study abroad program — traveling does change your life. And wander in idleness.