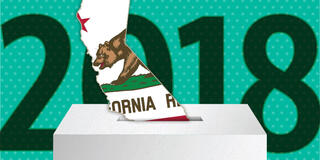 In the coming weeks, USFers and the public will have a chance to hear from and ask questions of top candidates in California’s governor race, thanks to a speaker series put on by the Leo T. McCarthy Center for Public Service and the Common Good and news organization POLITICO.

All events take place at
McLaren Conference Center
from 5–7 p.m. and are free
and open to the public.

California on the world stage

The speaker series is called “Conversations for the Common Good — Race for the Second Most Important Office in the Country.”

California — with a population of nearly 40 million — has one of the world’s largest economies, is home to more immigrants than any other state, and is a leader in everything from global trade to climate change policy, says McCarthy Center Director David Donahue.

“Whoever is governor of California is on a national and international stage,” he says. “It’s not unfair to think of the job as the second most important in the country.”

The speaker series was created to celebrate the McCarthy Center’s 15th anniversary. Next year the center plans to invite change makers from other fields, including arts and business.