She restores endangered amphibians to their native habitat 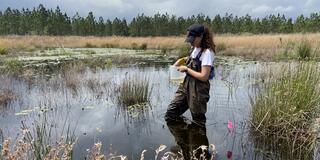 Wearing waders and creeping through waist-high pond water is just part of the job for Allison Bogisich MS '19.

In early spring, prime breeding season for dusky gopher frogs, it’s the only way to observe their semi-clear egg masses. Bogisich, a research technician with the Memphis Zoo in Tennessee, joins her colleagues working their way around a pond’s edge in the Mississippi bayou, placing flags where they find a mass and making notes about each.

At other times, Bogisich wades into the pond water to release captive-bred tadpoles and juvenile frogs. She also spends time in the lab analyzing data for a good part of the year. It’s a collaborative effort to reintroduce the frogs into a Mississippi bayou, with the goal of saving the species from extinction.

“These frogs are a vital part of the food webs of that area and of the ecosystem,” Bogisich said. “A lot of times people forget that by saving ecosystems and the environment, they are ultimately saving themselves as well.”

At last count, there were only a few hundred dusky gopher frogs left in the wild, Bogisich said. The main reason is habitat destruction — the frogs’ native longleaf pine forests in the Southeast have been developed into residential and industrial areas.

Since 2017, zoos, environmental nonprofits, universities, and government agencies have bred the frogs in captivity and then released tadpoles and juvenile frogs into the pond. Bogisich joined the effort in 2020, the first year that the frogs in the Memphis Zoo’s captive pond had bred naturally and laid eggs. That happened again in spring 2021, which was also the first documented year that the frogs released into the Mississippi bayou pond bred and eggs were found.

Thanks to a grant, Bogisich and two other scientists are now leading the effort to determine how many dusky gopher frogs live in and around the Mississippi bayou pond. Because it had no dusky gopher frogs prior to the project, any frogs found in its water are documented as reintroduced.

That’s great news not only for that pond and the dusky gopher frog, Bogisich said, but also for other efforts to reintroduce amphibian populations.

A longtime lover of amphibians — as a child, she had newts as pets — Bogisich studied Myanmar puddle frogs while at USF. Jennifer Dever, professor of biology and Bogisich’s thesis adviser, said Bogisich’s work in her lab was impressive. “She was able to learn about various molecular techniques for conserving threatened populations of amphibians,” Dever said. “I’m very proud of her work and that she’s now a critical part of conservation efforts.”

While some of her USF experience translates directly to her work now, Bogisich said a broader education is the more important benefit she received. She learned how to approach an experimental question in a scientifically rigorous way at USF, she said, adding that her time as a Don also taught her to always consider how her current work will affect the future.

“For me, this project represents hope,” Bogisich said. “Hope for a species and hope for research. It shows that if you do science, keep at it, keep asking questions, keep collecting data and comparing it to find what’s working and what’s not, that you can make progress. You can get closer to achieving goals, which in conservation, can seem especially impossible at times.”