An Education Worth Fighting For

Maria Poyer ’15 didn’t learn to read until she was nearly 14. She never learned phonics, and before she came to USF, she’d never written an essay. In fact, she’d spent less than four years of her life in school.

Today she’s a campus leader. She coordinates a dozen students’ work with at-risk youth, as part of the university’s service-learning requirement. And, after she graduates, she’ll join a highly competitive financial analyst program at Bank of America Merrill Lynch.

Her journey: from trailing a decade behind in school to being a standout student was fueled by the kind of passion you have for something you’ve had to fight for. It’s also a journey she couldn’t have made without the small, nurturing community of professors and classmates she found at USF, says Poyer, who spent one quarter enrolled at UC Los Angeles (UCLA) before transferring.

“Classes at UCLA had 500 students, and everyone was definitely on their own,” she says. “I don’t think I would’ve gotten a chance to be truly competitive and show my professors what I was capable of, if I hadn’t come to USF.”

A Leap of Faith

If you’re a slow reader, college can be a long, hard slog. That’s an apt description for Poyer’s early USF days, when the reading piled up. She couldn’t go a page without looking words up in the dictionary.

For years, she’d dreamed of going to college. Now, here she was surrounded by students who had written countless papers and taken advanced placement classes. She felt wildly out of place. What for them was the next step had been a giant leap of faith for Poyer.

Poyer’s parents belonged to a church that believed girls shouldn’t be educated. For years, she fought to go to school, finally winning when she was in eighth grade. She was nearly a decade behind her classmates. Even then, she was enrolled on and off, and when she graduated from high school, her parents told her that her education was finished.

But, Poyer was determined to go to college. She cut ties with her parents and worked full time for a year to save for tuition.

She spent her freshman year in USF’s Martín Baró Scholars (MBS) Program, a living-learning community exploring issues of citizenship, social justice, and diversity through a rigorous curriculum and immersive service learning. There were just 16 students in the program, and they formed a close-knit community, living together and taking all of their classes as a cohort.

For Poyer, it was academic and service-learning boot camp — reading and analyzing political, social, and economic theory and literature and writing about it. They also worked in the dining room of St. Anthony’s Foundation in the Tenderloin, serving the city’s poor and observing the social issues they discussed in class.

She says it was one of the hardest, most rewarding years of her life. She struggled academically and personally but found support in MBS’s small community.

“I could go to my professor at any moment and say, ‘I don’t know how to do this because I don’t actually know a lot of grammar. Can you help me?’” she says. “Instead of feeling judged, I felt recognized as a smart person with some gaps.”

At the end of her freshman year, Poyer thought: “Wow, I can’t believe I just did that.”

Poyer embraced college with both arms.

As an Advocate for Community Engagement at the McCarthy Center for Public Service and the Common Good, she facilitates service-learning opportunities for students.

She’s shined academically as an environmental science major and has jumped at the opportunity to learn subjects outside her focus. She can graft a tree, design a restaurant floor plan, and, after next semester, converse in French. She’s also great at analyzing large data sets, a skill that’s come in handy during her internship.

Last summer, she won one of 44 spots for students throughout the U.S. and Canada as part of Bank of America Merrill Lynch’s highly competitive intern program. She worked in commercial real estate, estimating buildings’ values, evaluating real estate deals, and meeting with bank clients. At the end of the summer, she was offered a full-time position in global commercial banking. She accepted and will start the summer after she graduates.

Of all the things she’s learned at USF, Poyer says, underlying it all is this: no matter what you choose to do, do it well and be of service. 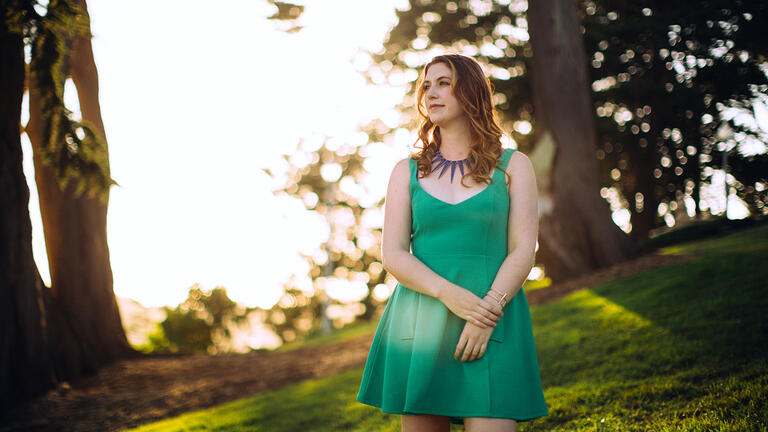 For Maria Poyer '15, USF's small classes and personal connection to top faculty made her feel right at home.