Diary of a USF in DC Fellow 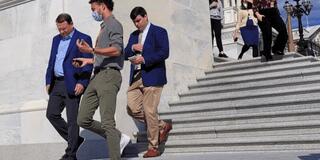 The first day I arrived on Capitol Hill, I got a short tour of the U.S. Capitol and all its intricacies. A fellow Politico reporter showed me the underground subway tunnels, numerous ornate conference rooms, and the press galleries that bustle with reporters from many publications. The tour lasted all of about 30 minutes before my colleague had to jet off on an assignment, and then the hand-holding was over. I was left on my own, thrown straight into the fire.

That day, I was tasked with getting quotes from lawmakers whom I had never heard of about a multitude of transportation topics I had never considered. As I stood outside the Senate chamber, I was nervous and unsure of my ability to complete the task. I didn’t know what every member of Congress looked like, especially while they were wearing masks. I was terrified of confusing one member with another and the embarrassment that would ensue. I was afraid of asking a question they deemed irrelevant, or messing up the facts. That first day, I think I only succeeded in talking to one lawmaker out of the twenty or so who were on my “potential gets” list.

Later, my editor informed me that my low success rate was completely OK and not out of the ordinary. I went back the next day and talked with more members, then even more the next day, and on and on. I started to gain confidence and felt that I was in my element. It wasn’t until I had a conversation with a friend in D.C. who wasn’t working in the political sphere that I realized just how much knowledge I had gained on the inner workings of Congress.

I became more self-assured, and confident. I started making the split-second movements required to obtain quotes from members in a confident manner and producing stories I was proud of. I’ve learned how to walk sideways and backwards up stairs in order to keep my recorder trained on lawmakers’ mouths. At the same time, I’m jockeying for position in scrums with 20 other reporters all trying to have their voices heard. These are very specific skills I never considered until coming to Capitol Hill. Being a Hill reporter is an experience like no other.

Speaking of unique experiences, people I’ve come face to face with while on the job with Politico include Nancy Pelosi, AOC, Bernie Sanders, and Elizabeth Warren. What I’ve learned is they’re all just that — people — not these larger-than-life figures we see on TV. Since I’m meeting them in their workplace, I always try to remain respectful of boundaries.

My USF in DC experience has been truly amazing so far. Just six months ago I was editor-in-chief of the Foghorn, and now I’m working full time as a Capitol Hill reporter. I’ve learned so much about power in Congress (who has it and how they use it), and journalism’s role in monitoring that power during my two months at Politico. I wake up every day knowing I’m going into the place where it all happens legislatively in the United States, and the privilege of that is not lost on me.

Want to be a USF in DC Fellow? Learn more here.