by Melissa Dale, Executive Director of the Center for Asia Pacific Studies

Sparking numerous dialogues between USF and the San Francisco Bay Area community, the Center for Asia Pacific Studies welcomed a diverse group of scholars to campus during the spring 2018 semester. From conversations with best-selling authors to screenings of award-winning documentaries to panel discussions with authors and members of the business community, the USF Center for Asia Pacific Studies continued to build bridges across the Pacific towards promoting greater cultural understanding. 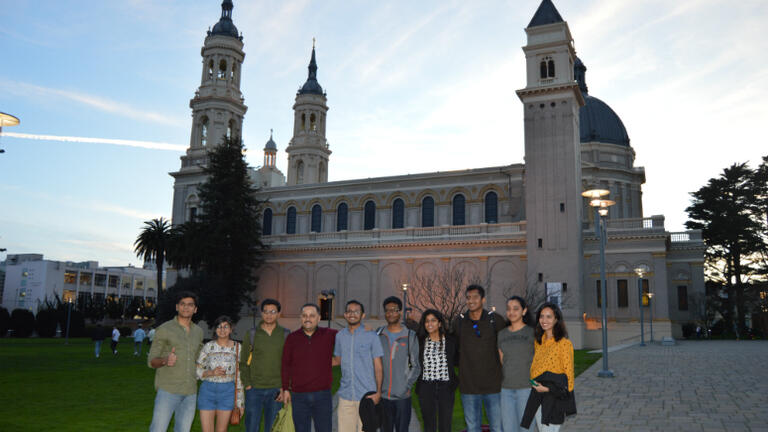 The Center for Asia Pacific Studies started off the spring semester on a high note with an engaging conversation with best-selling Indian author, Amish. To the delight of his fans and those just learning about his books, Amish spent the afternoon candidly answering questions about his unusual career trajectory, the inspiration behind his works, and how he breathes new life into ancient Indian myths. Amish shared his views on the importance of persistence in achieving one’s goals, his thoughts on teaching of history in India today and the how he uses his novels to make a statement about the status of women in Indian society and its caste system. 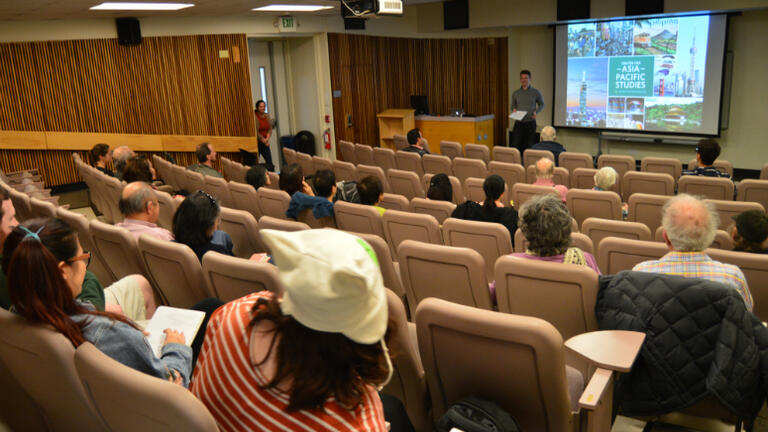 To increase awareness of LGBT issues in Asia, the Center screened the award-winning documentary, Inside the Chinese Closet. To put the film in context, the Center invited Andrew Geniesse Elmore (Ph.D. Candidate, Department of History, Stanford University) to present a short introduction on contemporary Chinese cultural expectations for gender and family. The film allowed viewers to explore the complexities of gay life in modern China and follow the efforts of Andy and Cherry – a gay man and woman – to find a spouse of the opposite sex for a “fake marriage.” The film reveals that while homosexuality is now legal in China, family expectations can put incredible social pressure on members of China’s “one child” generation. 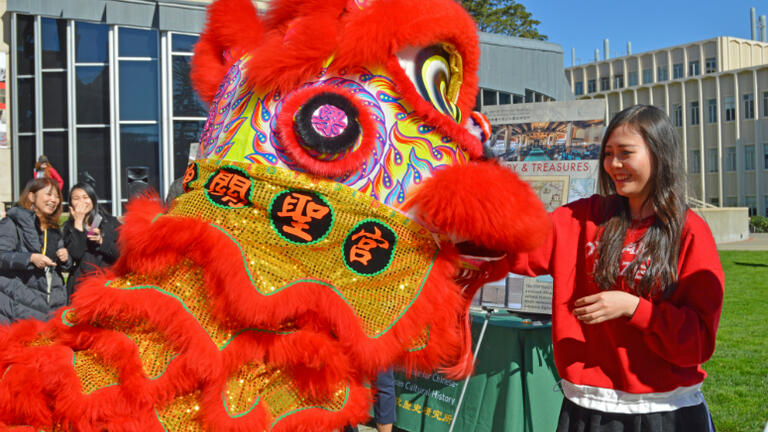 At the end of February, the Center celebrated the arrival of the Year of the Dog with a student-focused Lunar New Year event in Gleeson Plaza. Bringing together Asia-related programs on campus, the Center presented students and members of the community with a fun-filled event featuring a dumpling food truck, a DJ, a social media drive, and information about the Center along with the majors, minors, institutes, and initiatives that promote the study of the Asia Pacific at USF. 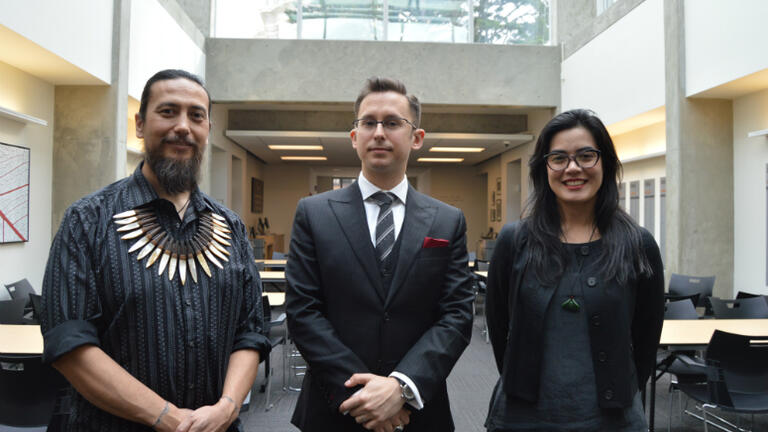 In March, the Center welcomed an art historian, a cultural anthropologist, and a traditional Filipino tattoo artist to campus to share their knowledge and expertise on tattoo cultures in the Asia Pacific. Speakers Quintana Heathman, Dr. John Skutlin, and Lane Wilcken delved into topics such as the tattoo stigma in contemporary Japan, the intersection of tattoos and art, and how today’s tattoo artists are keeping traditional Filipino cultural practices alive. 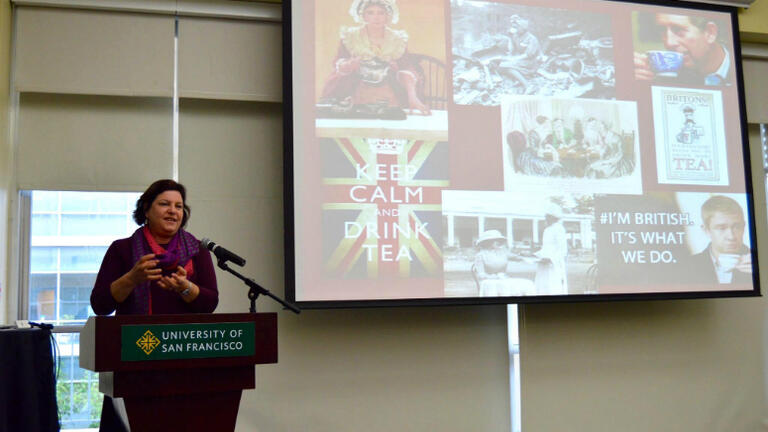 The following week, the Center approached another transnational topic, namely tea and its impact on the global economy and culture. Prof. Erika Rappaport, presented themes from her book, A Thirst for Empire: How Tea Shaped the Modern World. Comparing how marketers sold tea in India, the US, and UK in the late 19th century, Rappaport’s presentation was rich with visual imagery and stories of how tea became one of the most popular commodities all over the world. 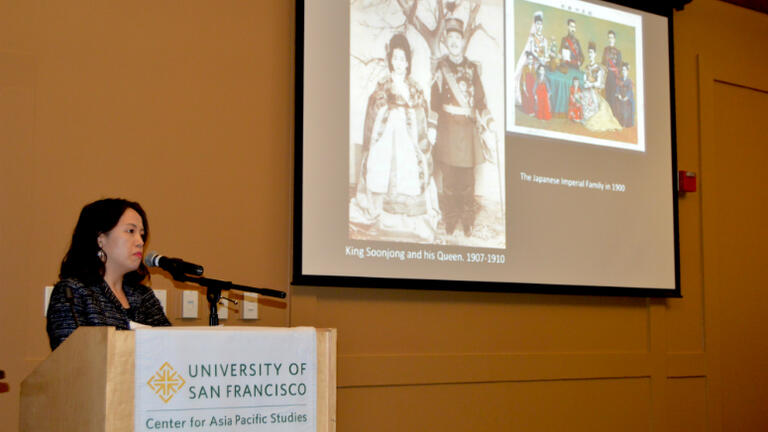 We turned next to a timely topic in the Asia Pacific community, the subject of cultural appropriation and how fashion shapes identity. In her keynote presentation for the Center’s spring symposium, “Fashioning Asian Identities,” Prof Kyunghee Pyun (Fashion Institute of Technology) shared research from her co-edited book on identity politics in modern Asia. Pyun’s lecture explored Chinese, Japanese, and Korean languages of dress, body, and gender identity in the larger contexts of trade, power, modernization, and socio-political discourses. Her broad overview of the topic stimulated attendees’ thoughts on the links between fashion and identity before the start of the symposium’s panels the next day. 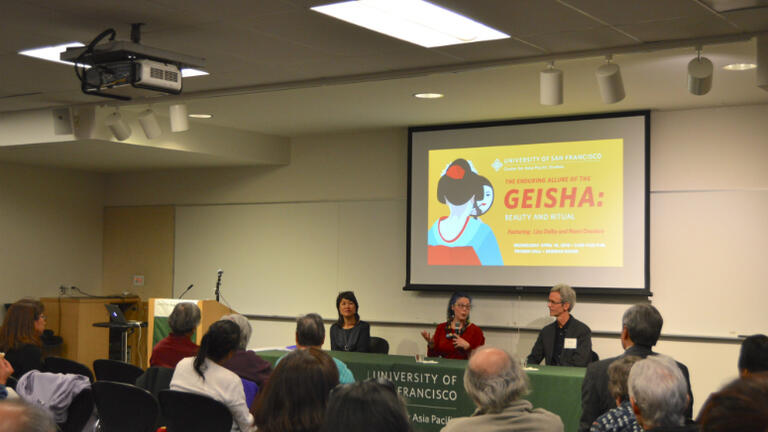 Exploring the enduring allure of Japan’s geisha from the viewpoint of fashion and the beauty industry, on April 18th the Center presented a panel featuring Liza Dalby (anthropologist and author), Nami Onodera ("geisha whisperer" and Senior Director of Brand Insight at TATCHA) with Prof. John Nelson as moderator. Dalby and Onodera delighted our audience with engaging presentations about geisha as fashionistas, preservers of tradition, and the inspiration for beauty products today. After the event, members of the Asia Pacific Women’s Roundtable and invited guests had an opportunity to meet our speakers and to network with those interested in the topic. 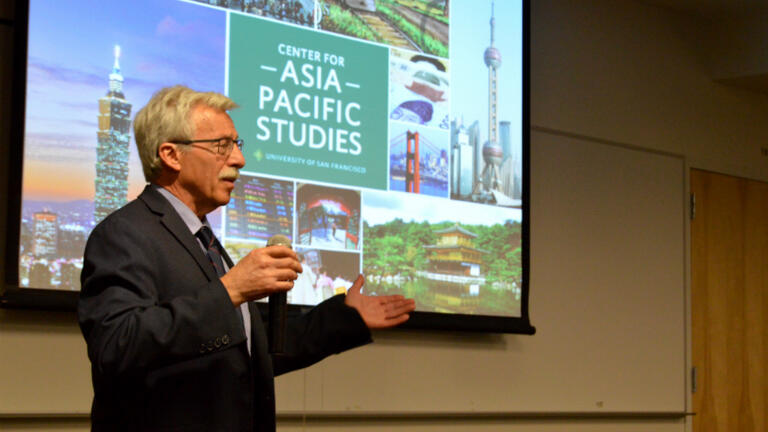 On April 25th, the Center welcomed Prof. Gerald Gems (Professor of Kinesiology Emeritus, North Central College) to campus to explore themes from his book, Sport and the American Occupation of the Philippines: Bats, Balls, and Bayonets. Gems traced the history of the American occupation of the Philippines and the role of sport in helping the US achieve its goals of establishing a democratic form of government, a capitalist economy, the Protestant religion, and a particular value system. According to Gems, sport became a primary means of achieving these goals, fostered initially by the American military, and then widely promoted in schools and the YMCA. Competitive programs, including international athletic games, channeled Filipino nationalism against Asian rivals rather than the American occupiers. Gems concluded his talk by examining the “soft power” strategies learned in the Philippines. 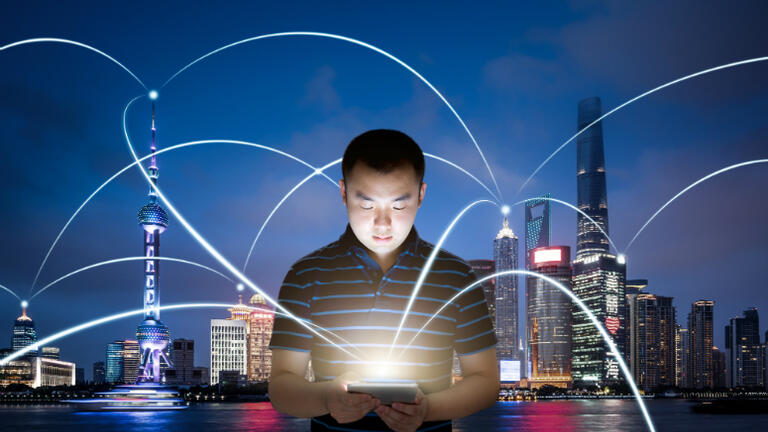 The Center wrapped up the spring semester by diving into the research conducted by our Kiriyama Professor, Dr. Tuen-yu Lau, during his spring residency at USF. On May 2nd he spoke on Who, What, How and Why: Decoding the Use of Regulations to Control the Internet in China Since 1987. Between 1991 and 2018, Chinese authorities enacted a total of 171 regulations to control the internet in China. Why? To answer, Lau explored several key questions important for understanding these regulations including: (1) Who uses the internet? (2) What messages and content are sent and received via internet and social media? (3) How can China control the channels used to disseminate the messages? and (4) Why is it necessary to implement these regulations to control the internet? Lau argued that with approximately 56.1 billion text messages being sent via social media and mobile phones in China during one month alone (August 2017), China faces large – but not insurmountable – challenges to exercising effective control over citizens’ uses of the internet, social media and mobile devices.