by Melissa Dale, Director of the Center for Asia Pacific Studies

Does clothing reflect our existing identity, or allow us to choose and shape entirely new ones? On April 4-5, 2018, scholars at the USF Center for Asia Pacific Studies’ spring symposium, “Fashioning Asian Identities,” explored the links between dress, fashion, and identity in modern and contemporary East Asia. The Center welcomed eight scholars to campus, representing universities in the United States, Canada, Hong Kong, and Australia, to share their thoughts on how fashion ideals have changed over time and how Asian fashion is influencing global designs and markets today.

The keynote address by Prof. Kyunghee Pyun (SUNY - Fashion Institute of Technology) started off the symposium with a broad overview of how fashion shaped identity politics in modern Asia. Based upon her forthcoming co-edited volume, Fashion, Identity, and Power in Modern Asia, Pyun’s lecture traced the popularity of cultural cross-dressing and the adoption of Western fashion styles in Meiji era Japan and colonial Korea. Pyun revealed how cultural cross-dressing and hybridity were “legacies of a tumultuous modernization process,” as traditional markers of status and manhood were exchanged for Western styles that were intended to signal a country’s arrival into the international community.  Pyun noted that cultural cross-dressing encompassed more than Asians dressing in Western style clothing, as some Westerners in the 1870s also dressed themselves in Japanese kimonos to sit for portraits. While not all instances were condescending, Pyun noted that “respectful and honorable cross-dressing is rare.” Pyun ending by referencing instances of cultural cross-dressing today that have made headlines and met with swift public backlash on social media for turning traditional dress into a costume. 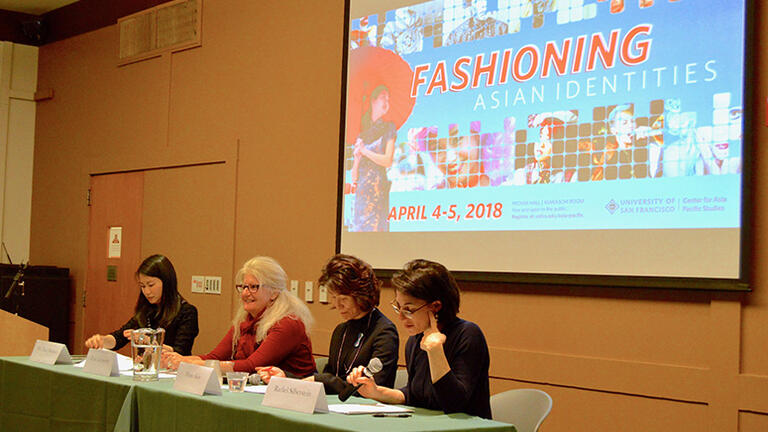 According to Melissa Dale, executive director of the Center for Asia Pacific Studies, “The symposium provided an excellent opportunity for students, faculty, and members of the community to learn about the Asian experience with fashion and how it has shaped Asian identities both historically and in Asia today.” In the first panel, presentations revealed the important role fashion played in Asia’s transition from the imperial to modern periods, with garments reflecting political and social change at the time. As Minjee Kim (Independent Scholar) and Paola Zamperini (Northwestern University) showed, new dress codes and styles signaled that Japan and Korea had joined the international community but also resulted in traditional dress being relegated to special occasions. Fashion sent messages and made statements about independence and Asia’s reinvention, not just in politics and the international arena, but also domestically in the sphere of women’s rights. Women were key instigators in fashion; as literacy spread (especially with the invention of Hangul in Korea) so did women’s insights on fashion and the latest trends in their areas. As Rachel Silberstein (University of Washington) revealed, fashionable wearers wore clothing that put forth an image of themselves as literate and educated. 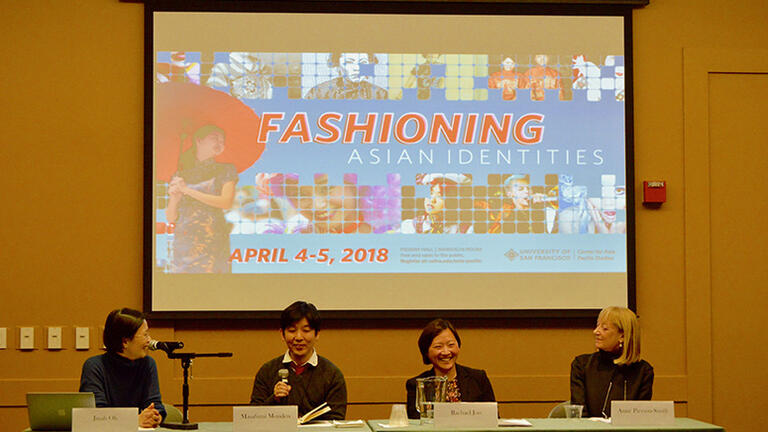 In the second panel, participants revealed how how Asia today is no longer viewed as primarily a source of labor but has become a source of inspiration and creativity for fashion. First, Japan and more recently, Korea have become sources of transnational fashion trends and ideals of beauty such as the concept of “flowery, beautiful” men. Masafumi Monden (University of Technical Sciences, Sydney) finds that while the female gaze prefers youthful looking men with a slender, tall build, Japanese men prefer an older, more rugged look. Rachael Joo (Middlebury College) noted that K-Pop stars have counterbalanced this softer look with toned, muscular “chocolate bar” abs intended to dispel any doubt that they are unambiguously male. Men’s self-fashioning through make-up and plastic surgery is a growing trend in which Korean men challenge previous ideas of masculinity. Cosplay, another Asian inspired trend that has become a transnational phenomenon, has been growing in popularity within Asia and throughout the world. Anne Peirson-Smith (City University of Hong Kong) shared how cosplayers fashion their identity through planning, sourcing and customizing their costumes and how in the process inhabit new personal and social spaces and often gain a sense of community. 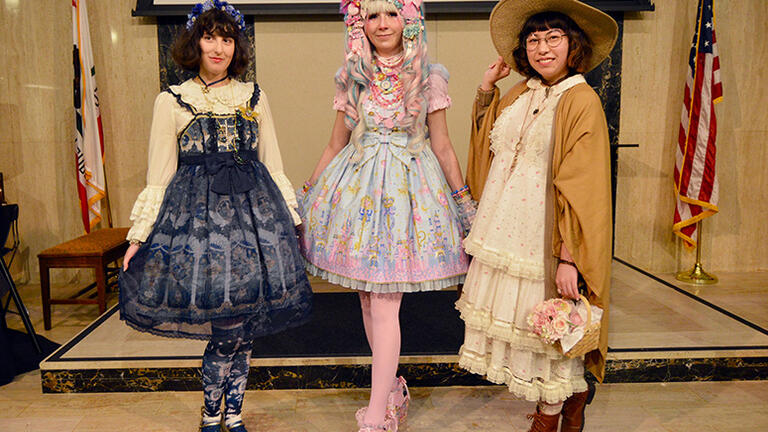 The Center concluded the symposium with a fun event designed to showcase some of the contemporary fashion trends in Asia today. An Nguyen’s introductory lecture based on her co-authored book, So Pretty/So Rotten, provided attendees with an understanding of Japan’s lolita fashion trend. An, along with fellow symposium panelists Joo and Peirson-Smith then served as judges for the Center’s first fashion show, “Tokyo Street Fashion Meets San Francisco.” According to Dale, “The audience was excited to see our eight contestants walk the runway and to hear how their outfits represented their favorite Tokyo street fashion style.”

Conference participants have been asked to submit their papers for consideration by the Center’s open access, peer-reviewed journal, Asia Pacific Perspectives. The journal is currently soliciting these and other articles for a special issue on fashion and identity in the Asia Pacific region for publication in fall 2018.

For more information on the papers presented at the symposium and participating speakers, please see the agenda. 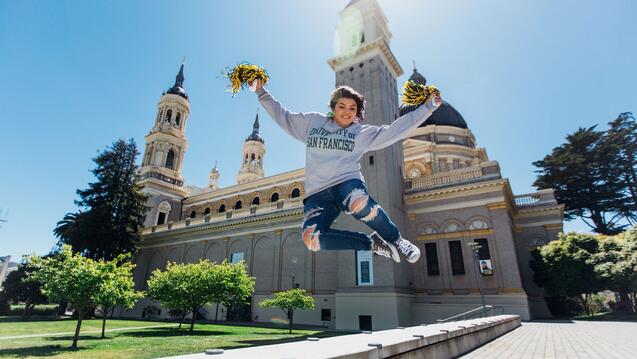