And Equal Justice for All

Alejandra Ruiz '17 was studying biology in community college when she took her first political science course and discovered she loved it. Soon after, she transferred to USF, changed her major to politics, and began researching policing and criminal justice reform. 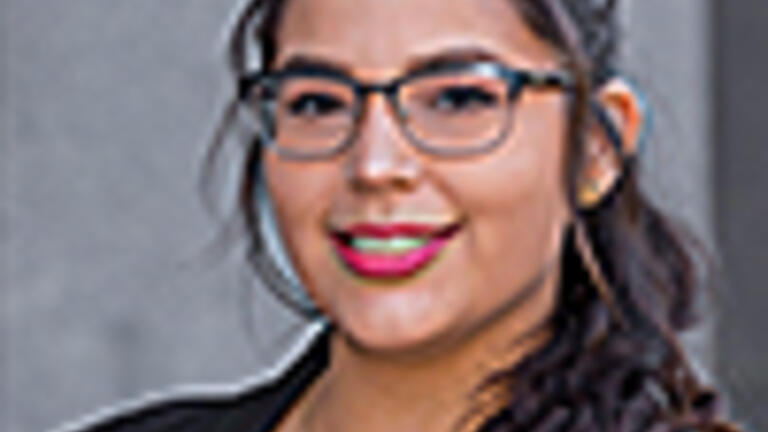 Superior Court fellowship that allows her to work full-time at the courts while earning a master’s degree in public policy from California State University, Sacramento.

USF News asked Ruiz about her current work to increase access to the judicial system.

What sparked your interest in criminal justice?
After transferring to USF for my junior year, I took an independent research course with Max Neiman, an adjunct politics professor. I compared the federal and state prison systems to systems in other countries. I became aware of problems like the U.S.'s highest-in-the-world incarceration rate (716 per 10,000 people), California's high prison recidivism rate (68 percent in three years), the mass incarceration of people of color, the widespread practice of racial profiling, and the lack of programs aimed at reforming and readying inmates for release.

I decided the idea that imprisoned people can't be reformed needed to be addressed. If other countries can do it, we can find a better way to do it here in the U.S.

What did you like about studying politics at USF?
I was part of the honors program and benefited from its cross-disciplinary approach of studying literature, history, art, and philosophy. This allowed me to learn the history of punishment and institutions that are driving factors in America’s views on crime and prisoners, and to see that we can't just transplant one system into our own. We must account for our demographics, history, and societal structure if we want to implement effective change.

I was also able to connect through USF to community-based organizations that work with people in prison. One organization I volunteered with was California Prison Focus, which tries to end long-term, solitary confinement in California prisons. I answered mail from inmates, distributed resources, and contributed to the quarterly newspaper.

Can you tell us about your work at the San Francisco County Superior Court?
As a fellow, I work full-time behind the scenes to make the legal system more human-centered. One of the projects I've taken the lead on is making sure the court's website, signs, and other materials are translated into Chinese, Russian, Spanish, Tagalog, and Vietnamese (San Francisco's most common languages).

Going to court is intimidating. Not being able to read and understand what's going on or what you're signing puts people at risk. I want all the public to have equal access to justice, and part of access is understanding — regardless of your language.

I also assisted the court's communications director with the Jose Inez Garcia Zarate trial, which involved the death of a woman that received national coverage. I supported the court's mission to ensure a fair trial that the media and public could have access by issuing reporters' credentials, protecting jurors' identifications, ensuring no pictures were taken in court, and making sure the judge's court-ordered rules were followed.

How did you find the Judicial Fellows Program?
I heard about the program through the USF politics department and knew instantly it was a perfect fit. I reached out to a USF alumna who was in the program, and she shed some light on the application process. I'm learning everything about how the courts are administered behind the scenes, both in real life and in an academic setting.

Any plans after you graduate and the fellowship ends in 2019?
I want to advocate for better inmate and victim rehabilitation programs and work to reduce California's high recidivism rate. I feel that locking up people and then denying them resources does nothing to address the underlying reasons they commit crimes. I believe in a restorative approach to criminal justice that increases inmates’ empathy and encourages them to take responsibility and become contributing members to society.