The Asia Pacific Today: Perspectives from the Consul General's Office 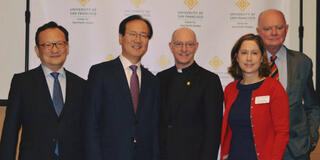 On October 30, the USF Center for Asia Pacific Studies hosted the Consuls General of Australia, Japan, and the Republic of Korea for “The Asia Pacific Today: Perspectives from the Consul General's Office.”

This event attracted a large, diverse audience made up of students, faculty, and members of the community, all interested in hearing the Consuls General share their thoughts on topics they considered important for our understanding of the Asia Pacific today. The event provided attendees with a unique opportunity to hear from all three consuls general at once.

Fr. Paul J. Fitzgerald, SJ, president of the university, welcomed distinguished guests and attendees and noted the university’s achievement of admissions and recruitment milestones in regards to the Asia Pacific area. 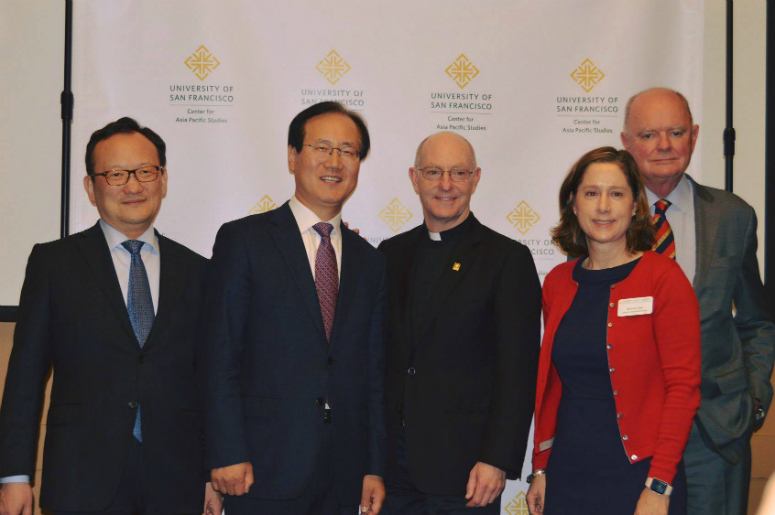 Chris Oldfield, Consul General & Senior Trade and Investment Commissioner at the Australian Consulate-General in San Francisco, who is just finishing his posting in San Francisco, began his presentation by stressing that he would be speaking about issues in the broader Indo-Pacific region rather than just the Asia Pacific. The CG emphasized how trade is intertwined with diplomatic outcomes and noted how Australia has been building relationships with countries in the pan-Indian Ocean area. He also addressed security issues in the Indo-Pacific region, specifically North Korea’s development of long range missiles and nuclear weapons. CG Oldfield then provided attendees with an overview of Australia’s Foreign Affairs White Paper (issued in November 2017) and his government’s goals of working with its Indo-Pacific regional partners, maximizing opportunities for trade, and strengthening and promoting rules-based order. In addition to the political issues, CG Oldfield emphasized the technological challenges and opportunities Australia is facing. The CG reminded the audience of the strong ties between the US and Australia and shared his perspectives on the importance of his country working with Japan, the Republic of Korea, and India to maintain a peaceful environment in the Oceania area. The CG concluded his presentation by focusing on how Australia had been strategically building its relationship with China and how countries in the Trans-Pacific Partnership (TPP) are continuing to work together despite the US withdrawal from the group. 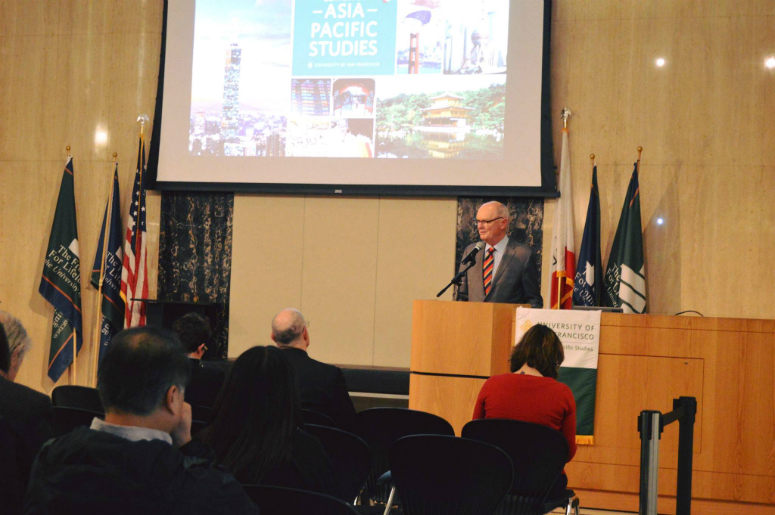 The Consul General of Japan, Mr. Tomochika Uyama, who began his career with the Ministry of Foreign Affairs of Japan in 1986, then shared his perspectives on Japan’s economic strategy in the Asia Pacific region.  To be more competitive in the global market, Japanese companies have been diversifying beyond exporting electronics to exporting basic services to other counties. By creating greater Japanese company brand awareness, the Japanese market will prosper.  In addition to discussing trade, CG Uyama also spoke about the meetings between leadership in Japan and the United States and reconfirmed their commitment to building long lasting relationships. Lastly, the CG gave an update on the Japan-China relationship, noting that both countries have decided to work together, moving from competition to cooperation. President Xi’s planned attendance at the G20 summit in Osaka in 2019 will provide an opportunity for both sides to continue to work on their bilateral relations. 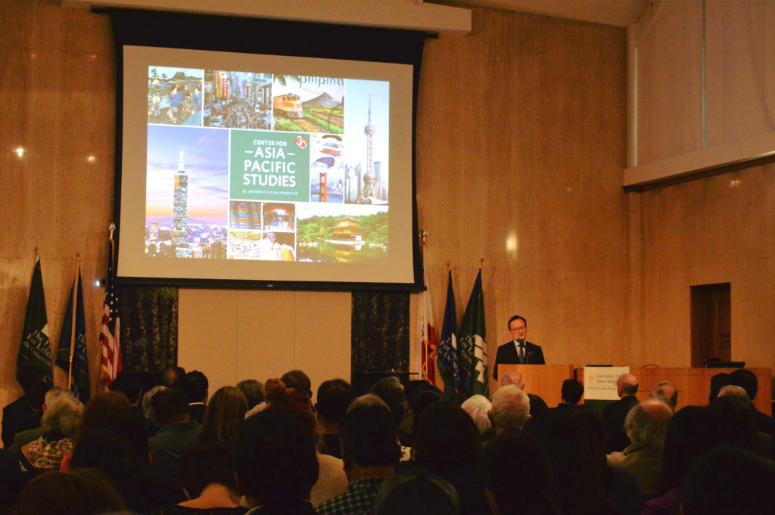 The Consul General of the Republic of Korea in San Francisco, Mr. Joon-yong Park, a 31-year career diplomat, who has served in posts such as China, Vancouver, Myanmar, and Vienna, then offered his views on recent developments on the Korean Peninsula.  In a slide show full of detailed graphs and photos, CG Park pointed out the increase in ballistic missile launches by North Korea over the years as well as the number of envoys exchanged between South and North Korea. CG Park then focused on the recent historic meetings on the Korean Peninsula between the Democratic People’s Republic of Korea’s Kim Jung-un and the Republic of Korea’s Moon Jae-In. CG Park explained to the audience how both governments are working towards achieving harmony on the peninsula and highlighted the recent signing of the Panmunjom Declaration at the April 2018 Inter-Korean Summit; Vice Chairman of North Korea, Kim Yong Chol’s Visit to Washington, D.C.; the U.S - North Korea Summit in Singapore; the Pyongyang Inter-Korean Summit; and the Pyongyang Joint Declaration. CG Park then offered his thoughts on several important questions: “Does North Korea have genuine intent to denuclearize?”; “What is the possible impact of a declaration ending the Korean War on the ROK-US Alliance and USFK?”; “How fast can North Korea be denuclearized?”; and “To what level can the U.S. improve its relations with North Korea?” He ended his presentation by stressing the importance of economic relations between Korea and the U.S., and more specifically, California. 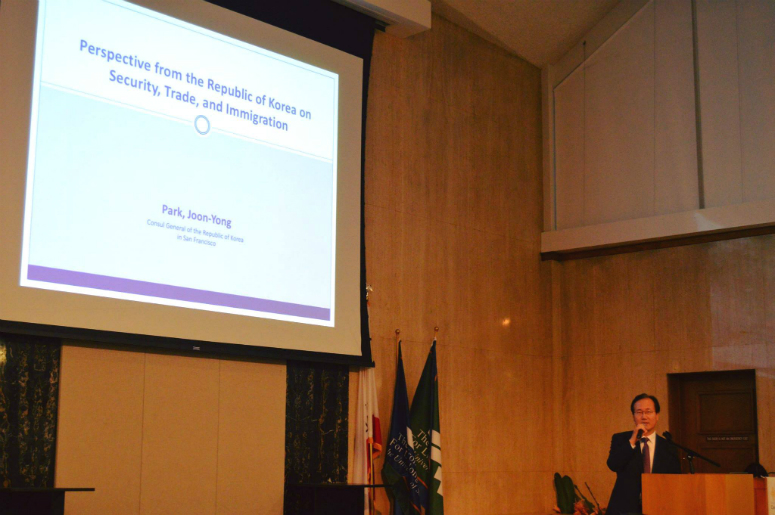 This event was part of a semester-long series of lectures organized in celebration of the Center for Asia Pacific Studies’ 30th anniversary. Melissa Dale, Executive Director of the Center, dedicated the event to Center Executive Advisory Board Member, Don Reid, and thanked him for his continuous support of the Center’s work in bridging cultures across the Pacific. This free and open event attracted more than 140 people who left with a better understanding of the issues facing the Asia Pacific today. 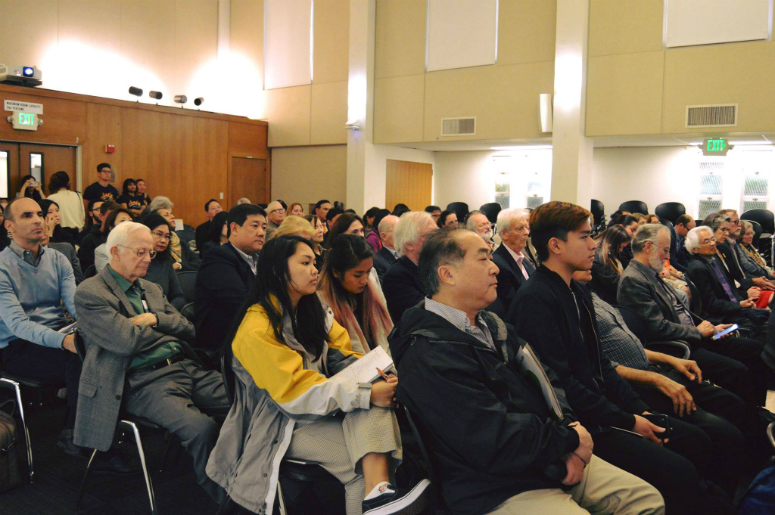