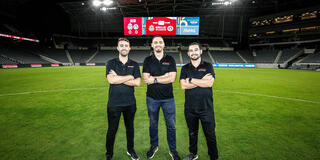 Two Spanish-speaking students in the University of San Francisco’s Sport Management program will have the opportunity to earn money toward their degrees as well as gain experience in the industry, thanks to a new partnership between the program and Primetime Sports & Entertainment.

Primetime Sports & Entertainment is a Southern California-based sports marketing and media agency that focuses on the Latino market. This year, two USF students will be selected to each receive a $5,000 scholarship and an internship with Primetime.

“The power of the Latino market is impacting all sectors of American society and is leading trends in important areas of the sport industry,” said Ashley Sloper, associate director of USF’s Sport Management program. “Latinos have a 25 percent growth rate in sports watching compared with a 3 percent decline among non-Hispanics. For example, in the U.S. the popularity of soccer has grown significantly, with Latinos fueling that growth. At the same time, we see that across the board the sport industry as a whole lacks both gender and ethnic representation. This partnership helps provide both financial assistance and professional opportunities to Latino students.”

Students selected for the award must demonstrate fluency in Spanish. As interns, they’ll be immersed in the Latino sports market in the United States, working with the Primetime team both in the Los Angeles office and at events across the country.

Primetime assists with digital and experiential marketing for matches such as Súper Clásico, Copa America, Gold Cup, Mexico National Team games, International Champions Cup, and Leagues Cup across the United States. In 2021, Primetime became the first sports agency to produce the first international soccer match in the U.S. with fans — socially distanced — after the start of the pandemic. It was also the first sport agency to produce 11 soccer matches in the United States, including a record 10 games in four months.

The USF partnership demonstrates the power of the Sport Management program’s alumni network — Primetime employs three USF graduates, all of whom attended the program at the Orange County campus.

“I am excited to see how this scholarship and partnership opportunity will create a unique experience for students striving to jump into a sport industry that has an underrepresented growing market,” said Waldo Amador MA ’19, partnership marketing manager at Primetime. “We are proud to give this opportunity to our future USF leaders.”

Of USF’s Sport Management students, 86 percent who identify as first-generation students also identify as Hispanic. Both the program and the university aim to provide opportunities for underrepresented students, Sloper said, and this partnership does exactly that while also addressing a fast-growing yet underrepresented market of sports fans.