Rise. Thrive. Give Back.

For this student, USF is the first step on a path of purpose 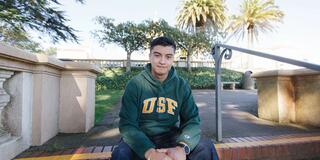 When Ryan Lopez '25 first saw the Hilltop eight years ago, he resolved to go to college — at USF.

“I felt this energy on campus,” he said. “It’s hard to describe. It was like a warmth.”

On that day, when he was just 10 years old, Lopez took a guided tour of the main campus as a member of the Ballet Folklórico Tonantzin, a youth dance group in his hometown of Half Moon Bay. The group performed on stage at USF that evening, to raise funds for scholarships for undocumented students.

Seven years later, Lopez applied to USF. Now a first-year student, he said the warmth that he sensed on campus is still here.

“The teachers care,” he said. “They don’t just show up and give a lecture. They interact with you. They treat you with respect.”

One of the biggest attractions of USF is the diversity of students, he added.

“Everyone here has their own story and identity and that’s something that you can see in how the teachers treat the students, like each student is treated as their own person.”

Lopez, a politics major, said he hopes to attend the School of Law and then practice immigration law or family law.

“Every assignment, I give my full effort, like more than 100 percent,” he said. “I want to rise, but not just for me. I want to make sure that my brothers and sisters and other people with a background similar to mine get the opportunities that I’ve had.”

This year, as an intern at Ayudando Latinos a Soñar (ALAS) in Half Moon Bay, Lopez is developing an ALAS program to help local students with schoolwork and with college counseling. ALAS, a community nonprofit founded by USF Professor Belinda Hernandez Arriaga, runs the Ballet Folklórico Tonantzin that Lopez joined years ago.

First in the Family

When Lopez was 14, he got up early each Saturday to help his father with his landscaping business. One day they trimmed a large tree in the backyard of a house in Millbrae. They cut the branches into logs and lugged them to his father’s truck.