'The Internet of its day'

USF museum studies students are set to premiere a new Thacher Gallery exhibit on Jan. 26, in a first-of-its kind show.

The exhibit marks the first time that a class in the two-year-old Museum Studies program has curated a gallery show from start to finish as well as the first time that the university’s rare and valuable Albrecht Dürer graphic prints and 42 early printed books (published before 1501) by a variety of authors will be displayed together. The exhibit, Reformations: Dürer and the New Age of Print, is the culmination of a semester-long curatorial practicum that allowed students to draw from Donohue Rare Book Room materials that date back 500 years and mark the moment when moveable-type presses were poised to change Western history.

“For me, the exhibit tells the story of access,” says Melissa Zabel MMS ’15, one of two students who took on the role of project manager for the show — coordinating student teams of researchers, designers, promoters, and more — as well as helped curate the show. “Before the moveable-type press, only the elite had access to art and hand-printed texts. The technological leap opened access to the masses, allowing them to see artistic and religious engravings, like those by Dürer, that were reprinted hundreds of times. The same was true for ideas, which began to be distributed in books and pamphlets about this time.”

The exhibit’s 118 prints and books (dating from 1465 to 1535) highlight the innovative uses of print technology in the formative era preceding the Protestant Reformation — when new ideas led to uprisings that threatened monarchies and the survival of the Roman Catholic Church.

Zabel and her classmates’ hands-on involvement illustrates the 16-month program’s “learning by doing” approach. “By allowing museum studies students to collaborate and work directly with rare and historically important objects, they learn what it means to care for objects, exhibits, and the stories they tell, and they have something to show for their efforts,” says Assistant Professor Catherine Lusheck, who teaches the Curatorial Studies Practicum.

The Internet of its day

It’s the kind of experience that’s likely to lead to an internship or job through faculty connections at the de Young Museum, Exploratorium, or other renowned local museums, said Zabel, who wants to find a job bringing museums and schools together to teach kids after she graduates.

“In a way, the moveable-type press was the Internet of its day,” says Sabrina Oliveros MMS ’15. Oliveros was an exhibit curator as well as a researcher and writer/editor for many of the descriptive panels mounted next to each display. She’s passionate about technology’s power to reach audiences outside of a museum walls, having grown up in the Philippines where museums can be hard to get to and expensive.

“This course helped me realize that I’m not crazy and that museum technology is something I should be thinking about,” Oliveros says. 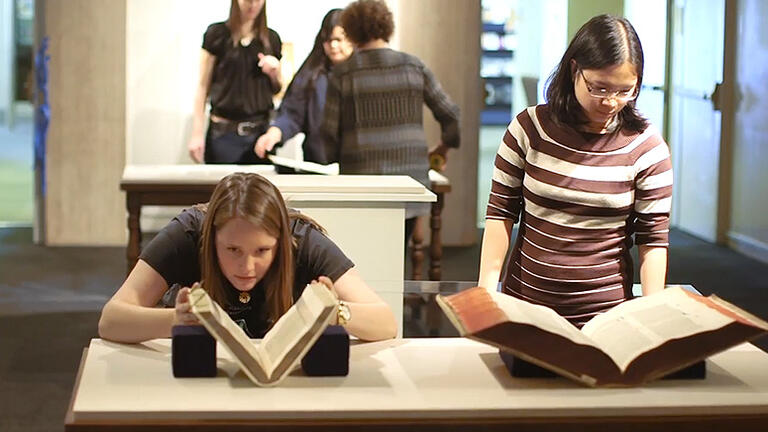 Look for parallels between early graphic prints and books featured in the Thacher Gallery's new exhibit and the Internet.