An Interview with Dave Madden

Associate Professor and Academic Director for the MFA Program 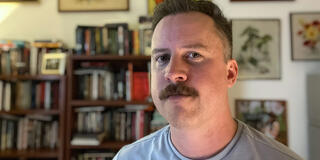 How would you describe your journey as a writer till now?

I came to writing late in life. In college I studied film and wanted to be a director, but then I took Intro to Journalism as an elective, and then I got an internship at the local alt-weekly newspaper, and I realized that with writing I could create without needing funding and a whole production team. I was living alone, mostly, in Pittsburgh, in the attic of an old house heated by a gas box I'd light each night with a match, and all I did was work and drink and read novels. I was closeted even to myself, and to make myself happier and give my life some direction, I thought, 'I'll get an MFA!' Then none of the MFA programs I applied to accepted me, so I tried again the next year, and those ones rejected me again. But the University of Nebraska's MA program said yes, so I moved to the middle of the country, realized I was another homosexual, applied to MFA programs a third time, got rejected by all of them again, and then Nebraska's PhD program said yes. There I studied the novel, but failed to write one, because I was too busy researching and writing a book on taxidermy, and much like how I had to first study film to eventually find the superior art of writing, I had to study fiction to find the superior art of the essay. My journey, frankly, is a mess. It's an uninspiring story, except maybe in this way: I didn't stop looking for what felt right for me.

What, in your opinion, has shaped your author's voice and how can new writers find their voice?

I studied German in high school, so likely a lot of my syntactic flourishes are informed by its grammar, and seeing beauty in German's frank utilitarianism probably led me diction-wise to prefer Anglo-Saxon words over Latinate ones. Also in high school, I was the drum major of our marching band for two years, which taught me tempo and cadence and I can now, all these decades later, be a bit finicky with the rhythms of my sentences. Plus the writers I love most are either funny or smart, and I'm no less susceptible to influence than anyone. This is how we find our voices: by speaking up within the same idiom that surrounds us, like toddlers do in families. Every writer is saying, by writing in a world that seems never to need more of it, 'I also have something to say!' And when we imagine the right voices in the heads of those we hope to reach, we tune our own voices to those. And then we stop, we shift, the voices change as the audience changes. I feel I need a new voice for every essay I write.

Being the academic director & part of the full-time faculty, how would you best describe the culture & nature of the MFA program at USF?

Everyone here works so hard and I'm always amazed and impressed by that commitment and compassion. In the years since I've been here, ours has been a culture of increased care and attention to things beyond the immediate questions of What Is Writing And How To Do It Better? Perhaps we've changed with the times, which are themselves more attentive, but the diversity of our students and faculty, and city we're in the middle of, and the kind of writing we value have created a program I love being a part of, as an artist who refuses to buy the idea that there's any one way to be an artist. Trust me that other programs I've been a part of or have visited get petty and competitive in ways that would likely amuse as just downright bizarre. That we don't have any truck with such bad, old ideas is a testament to us.

How has teaching writing to students for a long time affected your own style of writing, if in any way?

I came to essays as a young person who wanted to show off how smart he thought he was. I came to essays wanting to be right, always, at all costs. My students come to essays for better (to me) reasons: they come with a need to connect to other people, to share and understand, to transform the mess of life into an experience of art. I'm not sure if this is about affecting style as it is about affecting stuff, but the stuff I write and the way I try to position myself as a narrator in relation to that stuff now privileges risk and vulnerability more than it used to. My students taught me that. My students teach me so much. Just the other week a student taught me about how, for certain lives told within certain communities (usually those that have been overlooked and unrepresented by the majority), the story collection can often provide a better mimetic experience of that life than can the novel, with all its comprehensiveness and cohesion. I've got a whole doctoral degree in the novel and nobody had ever pointed that out to me before.

Finally, what's the one piece of writing advice that you absolutely swear by and would want every beginner writer to know?

You never have to do anything another writer is doing, even if they've got more or 'better' publications than you, even if they have a degree and have been assigned to teach the class you're in — there are so many ways to get writing done. Now: you do yourself a favor to listen and think about why they write the way they do, and what effects they create from that writing. But you do yourself a bigger favor by staying slightly dissatisfied but still at core in love with what and how you write. 'Kill your darlings' is heterosexist nonsense. Allow for your darlings. Embrace them. Blow them kisses as you step up onto a new stage.