“If one-sixth of the class equals one-fourth of the museum gallery mural niches, then how many students are in the class?” If that sounds like a new twist on a word problem you aced on a 7th grade math exam, give yourself an A+.

The problem is part of new instructional material created to open San Francisco middle school students’ eyes to the prevalence of math in a museum setting. Developing the basic material was the job of Benjamin Wells, USF mathematics and computer science professor. For his outstanding work in mathematics and computation, Wells recently received the 2009 USF Distinguished Research Award.

“Dr. Wells has developed innovative ideas in going beyond what is computable, and has complemented this foundational mathematical work with interdisciplinary research as a leader of the Fusion Project, using art to teach mathematics to at-risk middle school students,” according to USF’s Distinguished Research Committee.

The Fusion Project is a USF College of Arts and Sciences research program created by Philip Wagner and directed by Wells, with collaboration from the Fine Arts Museums of San Francisco. The Project seeks to bring art to the math classroom and math students to the art museum.

Wells’ development of the foundational classroom instructional material, which is currently being finalized and expanded into museum tour “encounters” through collaboration with other educators, resulted from surveying the permanent collections of San Francisco’s de Young Museum, as well as the museum’s interior and exterior architectural elements. He then matched the artwork on his list with relevant 7th grade math standards in California.

From the de Young’s metal exoskeleton to the giant photographic mural "Strontium" (2004) by German painter Gerhard Richter in the atrium, Wells’ analysis was instrumental as a roadmap for educators who will tour and enjoy the museum’s art with students, while touching on concepts like percentages, volumes, symmetry, and chaos.

The last student of mathematical logician Alfred Tarski, Wells was also commended by USF’s Distinguished Research Committee for his work on hypercomputation – computation that goes beyond what is computable by any means, mathematically defined.

His research has resulted in visual communication and simulation software, published papers, and works of art. It will be shared at the 2009 Bridges Conference in Banff, Alberta, Canada in July and the Unconventional Computation 2009 conference in Portugal in September. 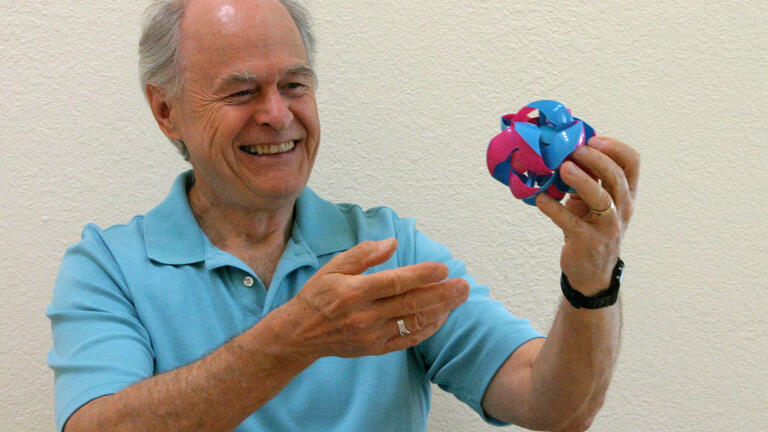