Rania Ahmed ’15 says the Master's in Urban Affairs (now Urban and Public Affairs) program prepared her for a life and career helping underserved communities in the Bay Area.

A Passion for Justice

Through USF’s program, Ahmed developed a deeper compassion for disadvantaged communities and populations, and has subsequently devoted much of her professional work to serving them. First, through an internship with the City of Albany’s Planning Division related to affordable housing, then her thesis work on food-insecure populations, and now her current work addressing poverty.

“The Urban Affairs program provided me with a safe environment to re-define my values, develop new skills and enhance my life and work ethics,” Ahmed said. “It challenged me to be a tolerant and receptive person to communities that I had always excluded from my private sphere because I was raised in a community that doesn’t accept the ‘other.’”

The shelter and support that the Urban Affairs Program provided me with have well prepared me to start a new chapter of my life as a well educated urban thinker.

“The program was very much about connecting academia to practice. Most of the assignments required us to research real-life policy issues and consider how to address social injustice in the ongoing political moment that the Bay Area is living,” she said.

One class in particular, “Urban Food Policy,” showed Ahmed how urban affairs can hinder or facilitate access to basic needs, depending on whether resources are used efficiently.

For example, “urban agriculture is one of the many underutilized resources that can provide the urban poor with access to food,” she said.

When San Francisco approved the Urban Agriculture Incentive Zones Act (UAIZ) in September 2014, it seemed like an opportune moment to start a conversation about the effectiveness of urban agriculture legislation. Ahmed analyzed the UAIZ, its implementation, and possible outcomes using research methods she learned in the classroom.

The UAIZ provides tax breaks for private property owners who use their vacant land in urban agriculture. Ahmed was hopeful that the UAIZ would provide greater access to food for San Francisco’s low-income populations by embracing and increasing urban farming. In her thesis, she notes that the UAIZ also has the potential to provide job opportunities, provide educational opportunities, build social capital, help revitalize disinvested areas, and improve public health through increased access to locally grown food. At the time of her thesis in May 2015, Ahmed said there were no applicants for the UAIZ. She thinks the UAIZ could have experienced a more successful launch had the city conducted more research prior to approving it.

I think that the City invested a lot of resources and capacity into the adoption and implementation of the UAIZ rather than investing in research about whether or not this policy is needed and will make a change.

But Ahmed still feels optimistic about the act’s potential, viewing it as just the first step in San Francisco’s development of urban agriculture. She says it’s a work in progress and the UAIZ may bear fruits in the long term.

In May 2015, at the McCarthy Center, Ahmed had the opportunity to present the results of her thesis research to Canadian undergraduate students from the University of Québec in Montreal during the Urban Affairs Association conference in Miami, Florida.

Where Is She Now?

Ahmed currently works as a Research Associate for the Urban Strategies Council, where she conducts research, analyzes data, co-writes reports, and develops mapping interventions in support of the Council’s mission to eliminate persistent poverty in the Bay Area. Ahmed aims to combine compassion with data analysis that targets policy and system change to benefit the Bay Area, particularly Oakland African American youth.

Ahmed is thankful to the Urban Affairs program for its support, particularly the close mentorship from faculty, which helped lead her to where she is today. 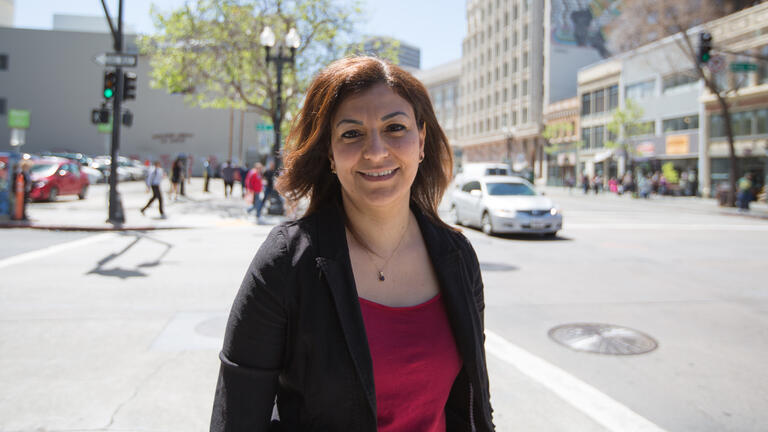